Our commitment to open data and transparency is paying off. Input from Global Fishing Watch users and the public, is helping us refine and improve our analyses. Today, we’re publishing an update to our groundbreaking transshipment report. Download the report now.

Last February we published The Global View of Transshipment: Preliminary Findings, an original report that maps and analyzes transshipment behavior around the globe.

In addition to our own analysis of the data, we made our transshipment vessel list and our data on likely and potential rendezvous publicly available. These lists were based on our detailed analysis of the behaviors of fishing vessels and transshipment vessels carrying Automatic Identification Systems (AIS). We released these data so that the wider community could use them, and also so that we could get feedback to improve our datasets.

We’re excited to say that a broad community has engaged with the data and provided valuable feedback. Given this feedback, and our continued work, we felt it would be valuable to produce a revised report that incorporates these changes.

Notable updates include the following:

You can download our updated lists of transshipment vessels and potential and likely rendezvous as well as the updated report.

These updates have improved the data, but the overall picture is more or less unchanged–at first glance, it is difficult to see a difference between the old map and the new one. 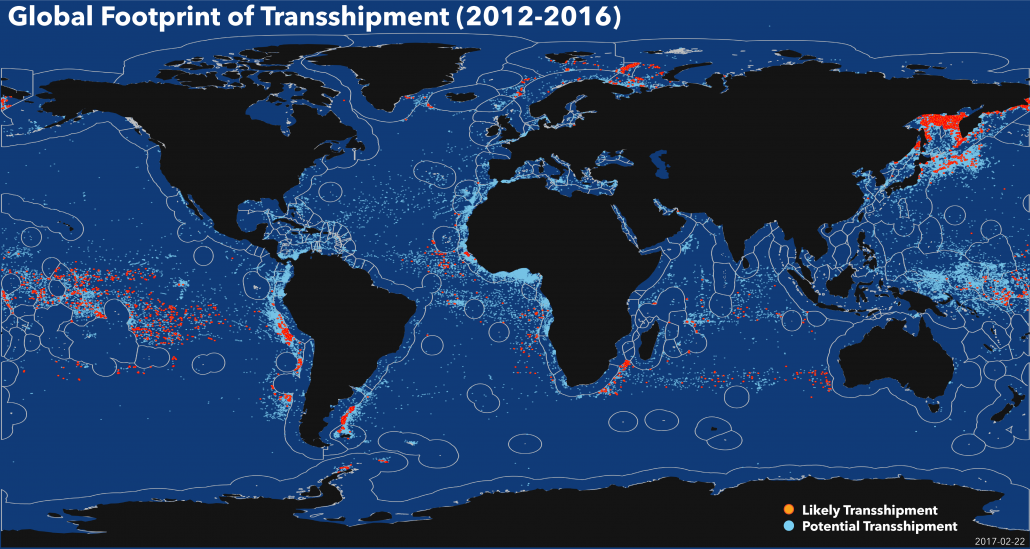 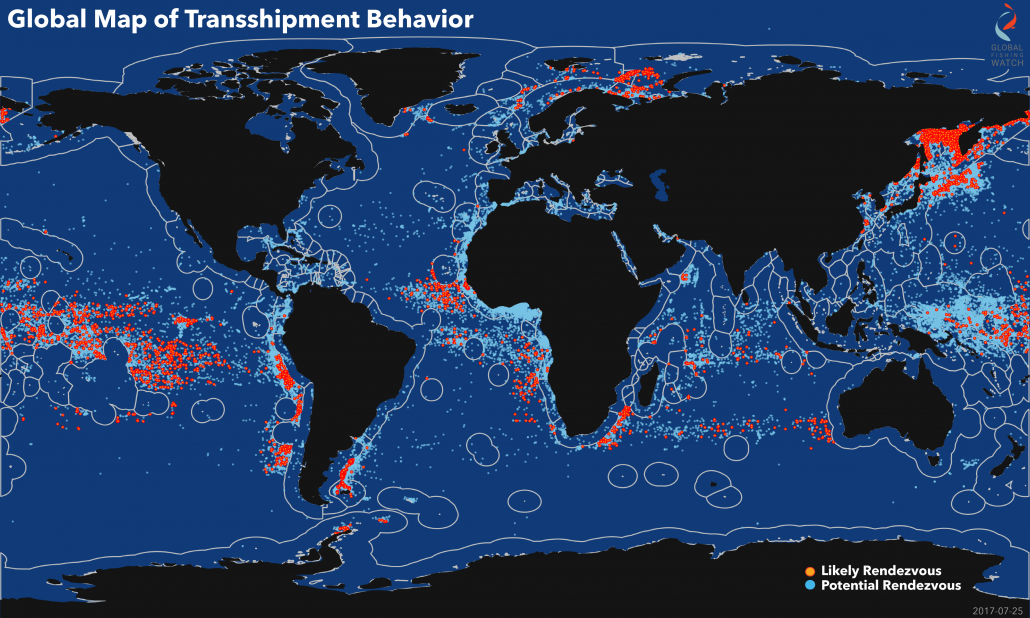 You can see on the map that we’ve added a number of previously undetected rendezvous in each ocean. This map includes previously unidentified vessels that have been newly added to our transshipment vessel list. While most of the previous patterns persist, some activity in the central-western Pacific and in the northern Indian Ocean is more apparent. 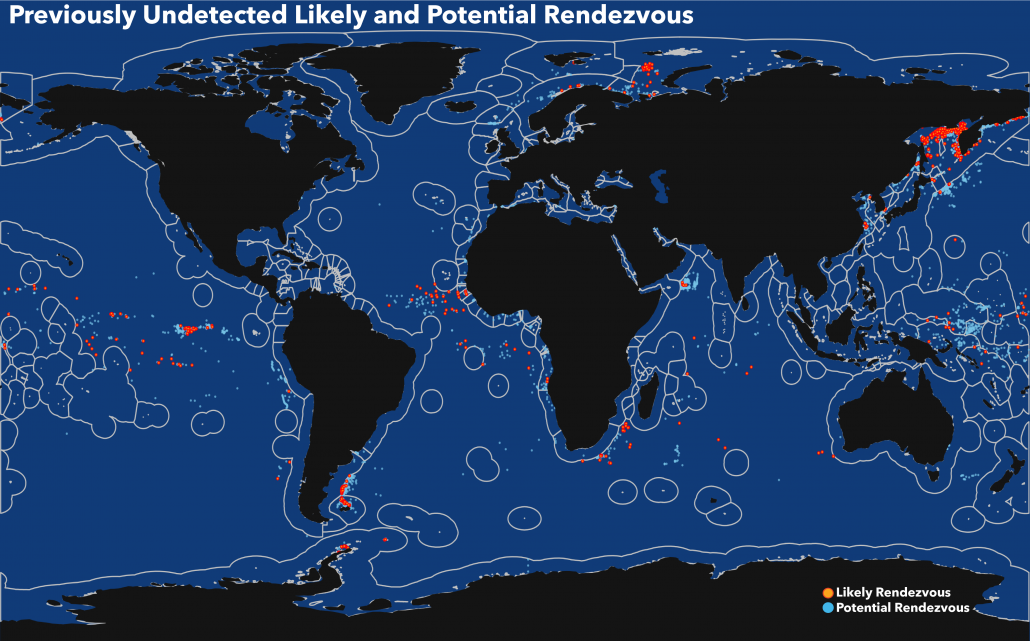 Finally, below is a map of the transshipment behavior that we removed from the previous version of the dataset. We believe these events do not involve the transshipment of fish, primarily because of the type of vessel involved. We have removed potential rendezvous along the coast of Colombia, Ecuador, and Peru, as well as those in the Gulf of Guinea and in the Pacific around Nauru. Seven of the eleven likely rendezvous (previously called Likely Transshipments) that have been removed involve a single bunker vessel, which is a vessel involved in refueling fishing vessels at sea. While this activity may not involve the transshipment of fish, such refueling is critical for the operation of distant water fleets. We are currently identifying patterns of bunker vessel behavior in much the same way as we have for transshipment vessels. 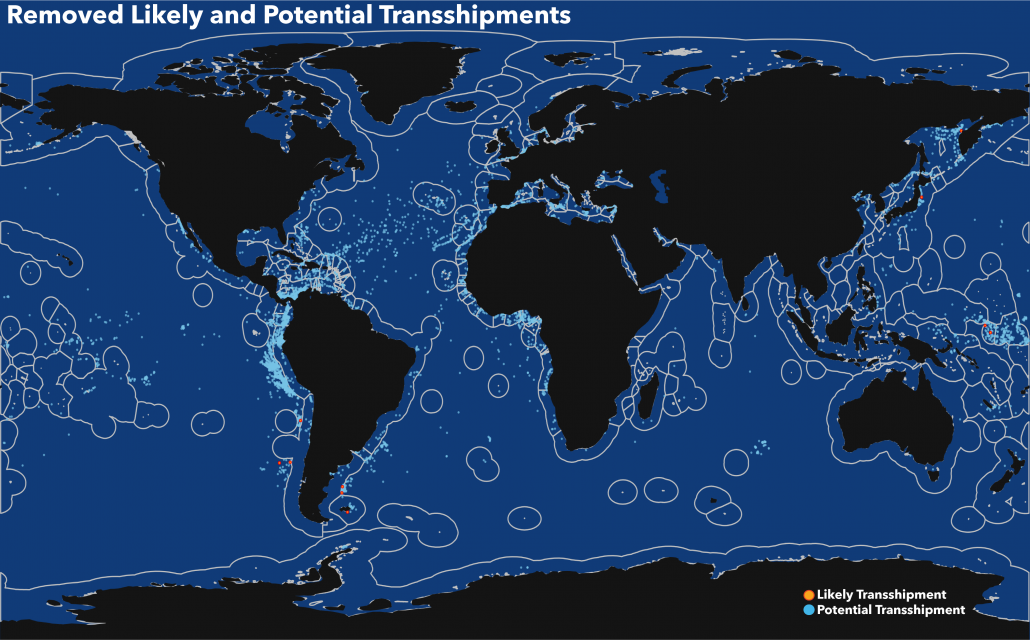 Interested in downloading and using the data? Learn about our Research Accelerator Program.

After receiving feedback that a number of the vessel on our list of vessels potentially involved in transshipment at sea may not be capable of transshipment, we carefully reevaluated each vessel. One-by-one, we conducted detailed searches of registry data, insurance coverage documents, vessel owner/operator websites, news and accident reports, vessel image catalogs, NGO grey literature, and others. The result of this exhaustive search was that we determined 111 of the vessels that were flagged as unlikely to be involved in at-sea transshipment, are in fact capable of transshipment and in some cases are documented to have done so. We retained these vessels on our list of transshipment vessels.

Following a search of the remaining vessels, we agreed it was unlikely they were involved in the transshipment of fish at sea, primarily because they were container ship reefers (vessels often referred to as reefers, but which carry freezer/refrigerator containers rather than having refrigerated cargo holds). While these vessels may often transport frozen fish, and therefore are substantively involved in the seafood supply chain, there is no evidence that fish can be transshipped directly from a fishing vessel into a freezer container at sea. While valid members of a ‘reefer list,’ these vessel were less suited to a list identifying vessels capable of at-sea transshipment.

In our revisions to the original report, the list we have developed, and continue to develop, includes vessels that operate as fish tenders, live fish carriers, and factory/processors, in addition to refrigerated cargo vessels. For that reason, we now refer to it as a transshipment vessel list, to more accurately characterize the vessels on it. It is important to note that this is not a list of vessels that have engaged in transshipment, or are suspected of engaging in transshipment, but simply a list of vessels capable of transshipping fish. We are then assess vessel behavior to identify likely and potential rendezvous involving these vessels.