The Tale of the Albatross and the Algorithm

The Tale of the Albatross and the Algorithm

The first-ever satellite mapping of fishing vessel behaviours has identified that very few vessels are using one of the key techniques to avoid accidentally killing albatrosses. Researchers hope a new analytics tool demonstrates that satellite data can help monitor efforts to reduce seabird mortality in fishing operations, and drive more transparency in general in the global fishing industry.

This is a story about the albatross, one of the most iconic and endangered groups of birds, about industrial fishing in the remotest ocean regions that kills them, and an astonishing experiment in machine learning which may just help to save them. The remarkable project outlined here could also usher in true transparency to a global industry which is increasingly regulated but still too poorly policed.

Stephanie Winnard is a person on a mission. Simply put, that mission is to end the accidental killing of tens of thousands of albatrosses every year in the fishing industry. Winnard knows all about the albatross. After completing a degree in biology, and earning her bird-tagging licence (yes, there is such a thing) she spent three chilly years in the sub-Antarctic studying these extraordinary birds, measuring their eggs, tagging their legs, observing their every move. 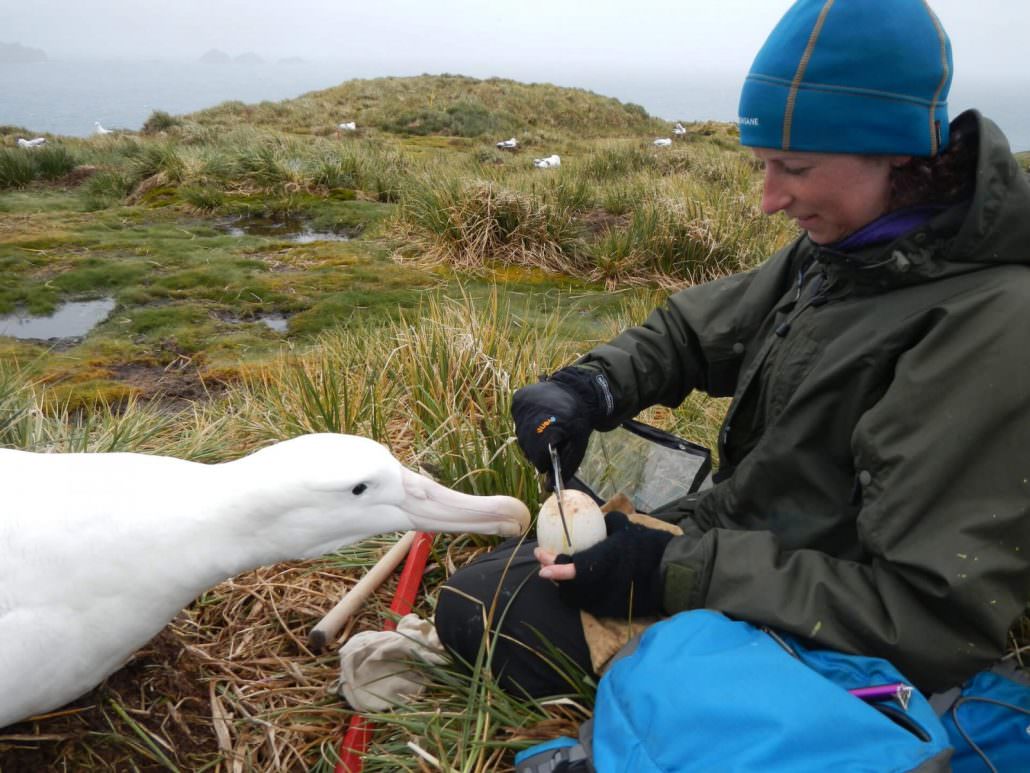 For the past two and a half years, Winnard has been part of the Albatross Task Force, a specialist unit set up in 2006 by the RSPB and Birdlife International. The Taskforce is dedicated to reducing the accidental killings of albatross that occur each year because of modern industrial fishing methods, and which are threatening to drive almost three quarters of all albatross species to extinction.

“Life is tough for seabirds, and especially for the albatross.” Winnard says. “Not only do they live in an extremely harsh environment, and are slow to breed, but they also face numerous human threats to their survival: most notably from fishing. Albatrosses, along with other  seabirds such as petrels, feed during daylight hours and are irresistibly attracted to the trailing, baited fishing lines.” says Winnard. 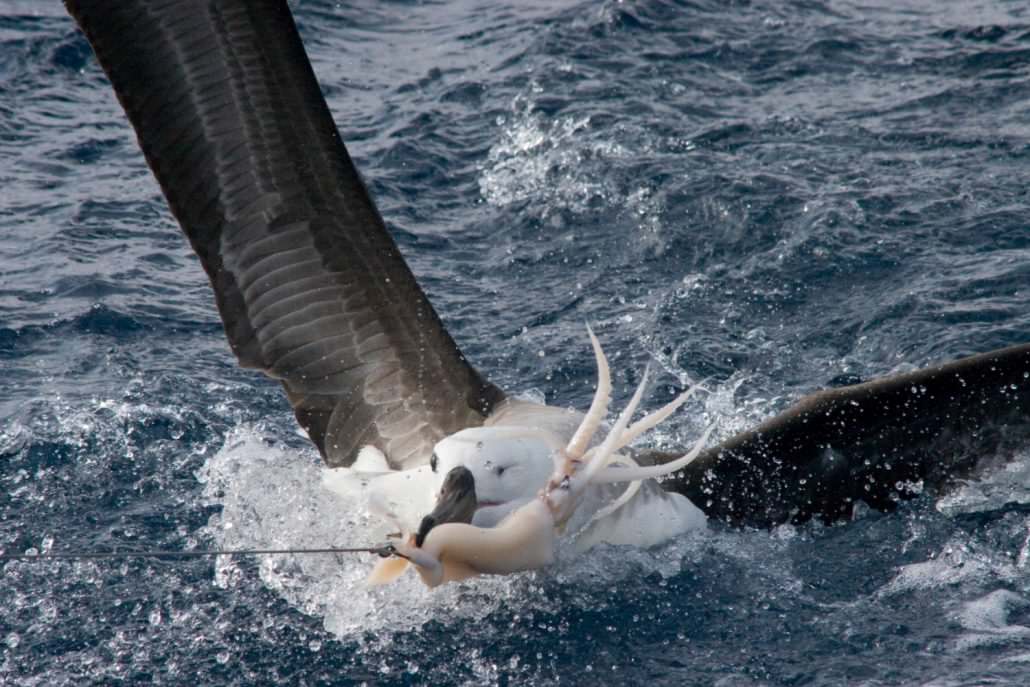 The main problem is due to longlining, a pervasive fishing method used to catch tuna and other ocean-going or pelagic species around the world. Longlines are exactly what their name suggests – fishing lines, sometimes up to 80 miles long (that is the length of three marathons), strung with up to three thousand baited hooks and ‘set’ behind fishing vessels.

Of all the ways in which animals are killed unintentionally by man’s activities, few seem more senseless than the drowning of huge seabirds that are ensnared on fishing hooks targeting entirely different species. Sadly, the same fate befalls turtles, sharks and other marine creatures. The official term used for this accidental, collateral damage to marine life caused by fishing is ‘bycatch’, one of those words which strongly sanitizes a deeply troubling problem. 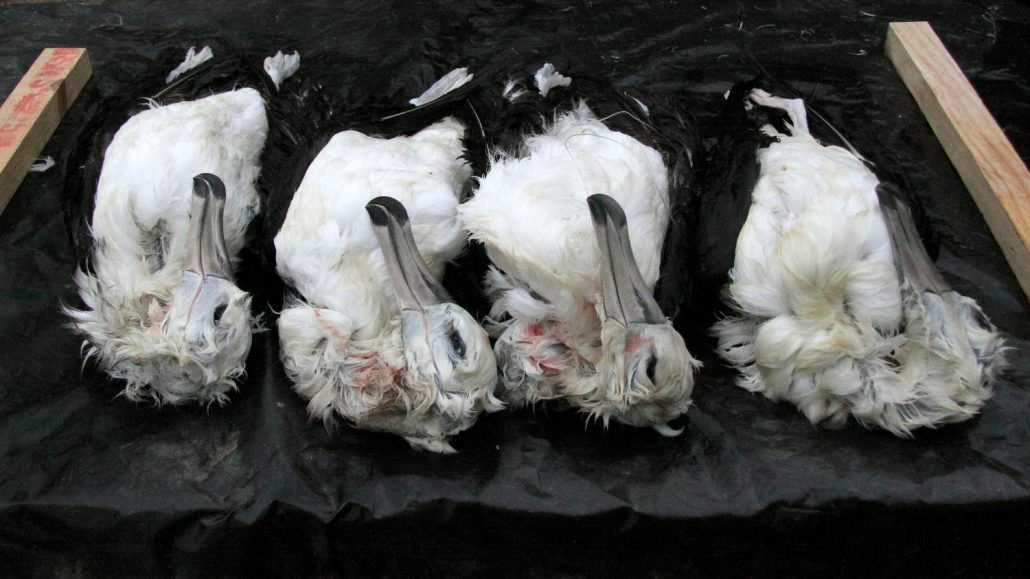 Victims of bycatch, these four albatrosses were hooked on longlines off the Namibian coast. Every year, over 100,000 albatrosses die this way in fisheries across the world. © John Paterson (Albatross Task Force Namibia)

“Birds flock to the boats in search of a free meal – but it can often be their last.” Winnard says. “It’s estimated that around 100,000 albatrosses are killed every year by longline and trawl fisheries around the world, where they are hooked and drowned, or struck by trawler cables and dragged under the water. This level of “bycatch” in the fishing industry is hugely unsustainable for birds that can take up to 10 years to start breeding.”

Fishing is the main threat to albatross, but it is not the only man-made peril they face. The image of the albatross chick killed by a plastic toothpick in its gullet in the most recent BBC Blue Planet series was powerful proof of the impact of plastic pollution on marine life. The photos Winnard has of row on row of drowned, waterlogged albatross, petrel and other seabirds laid out on vessel decks are also hard to forget.

The Task Force works directly with fishers and fishery managers worldwide on practical solutions to reduce the number of seabirds being killed by longliners and trawlers. As a result, many countries, and five of the Regional Fisheries Management Organisations (RFMOs) responsible for regulating highly-migratory tuna fisheries, have now adopted measures that require the use of so-called ‘mitigation measures’ to reduce bird mortality.

Longline fishing vessels operating in many of the high-seas areas (that’s areas beyond national waters, more than 200 nautical miles from shore) where albatross are widely found now have to use at least two of three mitigation measures when they are setting their lines. They can use weights to make their lines sink quickly below the surface, so the birds can’t reach the bait, they can attach bird-scaring or Tori lines strung with bright streamers to frighten the birds off, or they can adopt night setting – where lines are only put out for fishing between dusk and dawn when birds are less active. 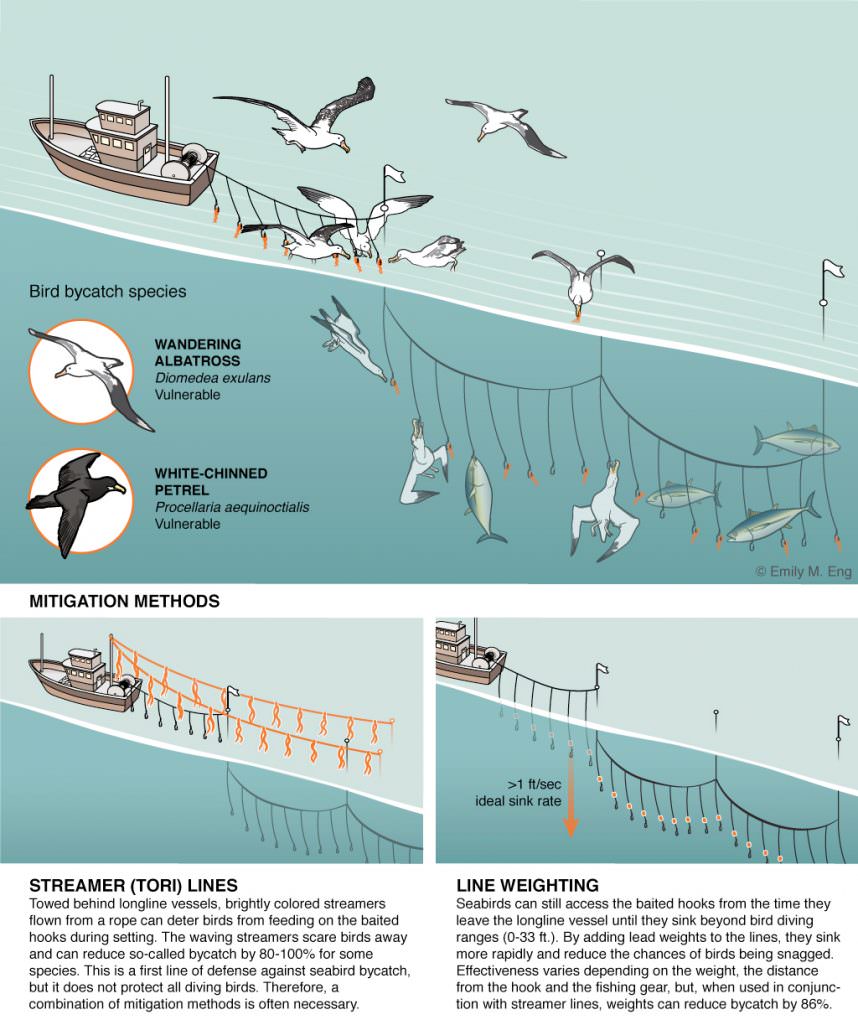 As albatrosses only feed during the day, setting lines at night is an effective way to ensure that they don’t get hooked and killed.

Monitoring use of these mitigation measures presents a challenge. Longline vessels can be at sea for up to 18 months at a time, few boats have on board observers to monitor fishing activity, which decreases how much influence governments are able to have on these fleets.

As any conservationist will point out, making rules is only the first part of effective action – authorities also need the capacity to carry out monitoring for compliance. When activities are happening in some of the most remote corners of the globe, how can governments do this?

Currently, where vessels lack on board observers to report fishing behaviour, self-reporting is currently all that anyone has to go on. Countries whose fleets are required to use these measures report widely differing levels of night-setting (between 29% and 85%) but it has long been suspected that many vessels are not doing as they say. How do authorities know if this is actually happening? This is the challenge that drove Stephanie Winnard to enter the world of machine learning and algorithms at Global Fishing Watch (GFW).

GFW’s lead researcher David Kroodsma has been working for 3 years now refining methods to track the activities of fishing vessels using the vessel positioning data, transmitted via on-board Automated Information System (AIS) transponders and picked up via satellites. Up until now, work has focussed on analysing the data captured to map the extent of global fishing geographically and temporally (for example when fishing moratoria are / are not in place).

All of which is ground-breaking in its way – but what the RSPB and Birdlife wanted was a whole new level of granularity. Could GFW ‘train’ its computers to recognise the exact manoeuvres a vessel undertakes while it is setting, and hauling, a longline – in order to see if setting was really happening at night?

“This was a new challenge.” Kroodsma says. “We did something pretty unprecedented, we trained machines to see if they could tell detailed vessel behaviour. Turns out, they can. Until now we could really only tell if vessel was fishing or not fishing, we could not go a level deeper and determine when they set a line, when they haul it in…now we can..” He adds that these same techniques can perhaps in future even identify the species vessels are targeting. 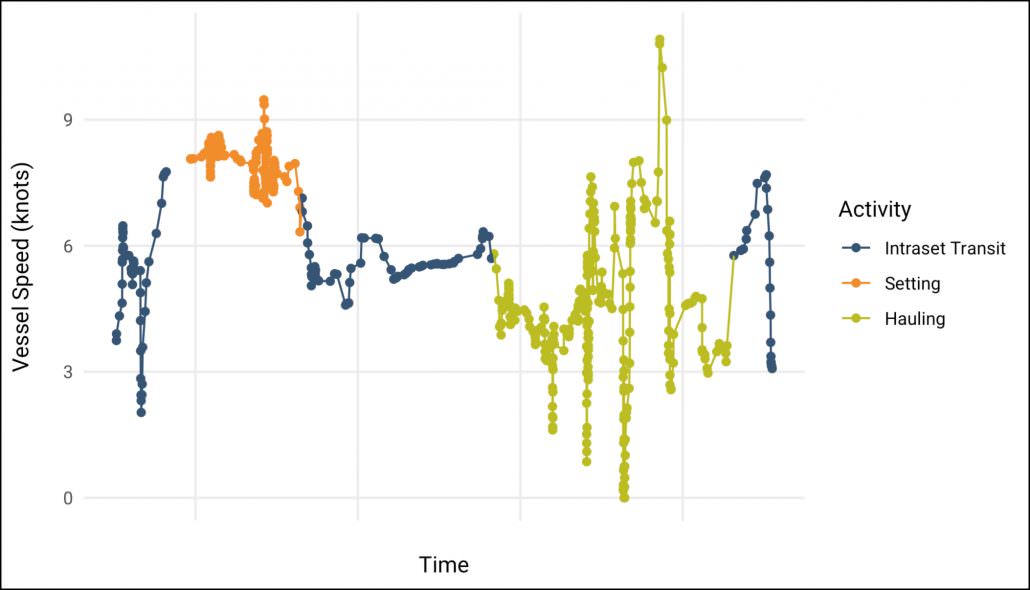 Example of the speed plot for the vessel track. Here we can see that the set is pretty fast and pretty consistent in speed. The intermediate period is pretty fast as the vessel returns to the start of the set, however it’s a bit slower, likely because the slightly slower speed is more fuel efficient, and then the haul is slower andpretty variable. We used this type of information to label more data and develop a model to predict sets. ©Global Fishing Watch / Nate Miller

The GFW team used data for 2017, received from more than 60 orbiting satellites, corresponding to more than 300 pelagic longline vessels operating in the southern Atlantic, Indian and Pacific Oceans (south of 25/30degs of latitude depending on area concerned) to train a model of longline setting. These are some of the remotest fishing grounds on Earth.

Studies have shown that bird bycatch rates suddenly increase one hour before sunrise, at nautical dawn, when birds start feeding, indicating that for night setting to be effective, the entire set must start after nautical dusk and end before nautical dawn. Indeed, this is the best practice as laid out by the Agreement on the Conservation of Albatrosses and Petrels (ACAP).

With this in mind, the start and end of sets, as predicted by GFW neural net algorithms, were then compared to the timing of nautical dawn and dusk at the vessel’s location to determine compliance with night setting.

More than 15,000 vessel sets were analysed in the refined data set. What the GFW team discovered was startling, and concerning.

Actual use of correct night setting (completely within the hours of dusk and dawn) was very low. 85% of sets were conducted with more than a two hour overlap with daylight, meaning only 15% of vessels (or potentially even fewer) set their lines fully at night. This is a very low level of compliance, considering some countries have self-reported using 85% night sets. 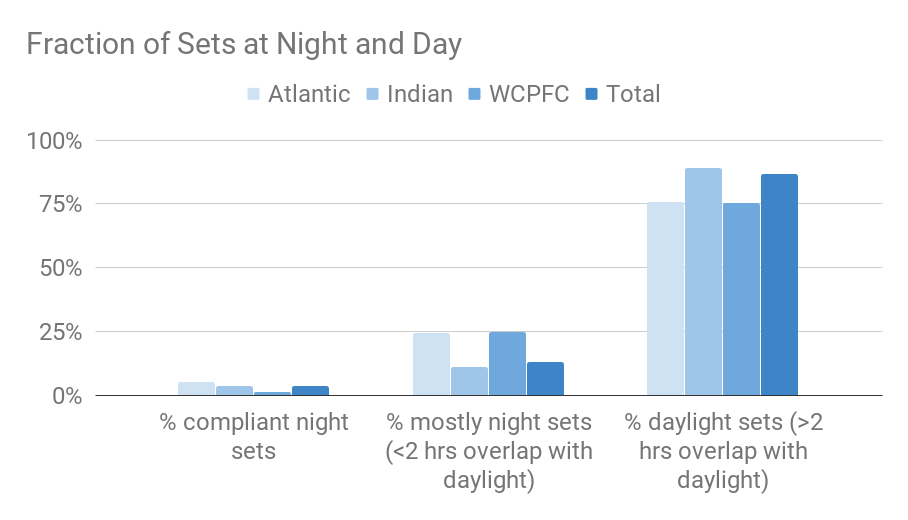 “What this has shown, very disappointingly, is that very few vessels have changed their fishing operations to night setting. But the aim of this research is not to point fingers at this stage.” Winnard stresses. “ We are sharing the results with the countries whose vessels were studied. What we hope is that countries will recognise the potential of this technology as a very cost-effective tool to help them with sustainable monitoring, and drive good practice.”

“The most important take-home from this is that our results show it is possible to use independent compliance data to assess night setting to within two hours of accuracy.” Kroodsma says “In future, technology like this could be used to inform countries and RFMOs of night setting implementation on a far larger scale than currently possible through just using traditional observers.”

There are also potentially even more far-reaching applications of this new granular level of analysis. Fishing fleets use a wide-range of techniques and fishing gear to harvest their catch, all subject to different types of regulation in different fisheries to reduce their impact on non-target species. GFW’s new know-how might mean for instance that compliance with requirements to reduce other bycatch such as endangered sharks can be much more closely scrutinised.

Kroodsma is hopeful. “Bit by bit, as we work with partners, we are cracking open the previously opaque world of global fisheries and their impact on ocean biodiversity. It makes clear that technology together with transparency will achieve effective management of the global fishing fleet. ”

Finally, back to the extraordinary albatross. It is somehow pleasing that a species famed for its long gliding flights (10,000 miles without a wing-flap in a single GPS-tracked journey) may now be helped using satellites sailing Earth’s orbit. Exciting too that this technology, with the right data modelling, could also aid the preservation of other threatened marine life. That would be a fitting 21st Century riposte to the great bird’s grievous fate in that famous poem.