When the UN launched the Sustainable Development Goals (SDGs) five years ago, the world aligned around the need to end illegal, unreported and unregulated (IUU) fishing by 2020 (SDG 14.4). Seen then as an achievable target, it is now a deadline we’re going to miss.

IUU fishing accounts for nearly 20% of the world catch; up to 50% in some areas, with poorer coastal states disproportionately affected. In the Pacific Ocean, a report estimated 24% of the fish are unreported and illegally traded in international markets. This directly leads to $4.3-8.3 billion of loss in gross revenues every year to the formal economy, and up to $21 billion per year across the fish value chain. In addition, destructive fishing methods and deceptive practices are being used to reap profits at the expense of local fisheries, coastal states and the marine environment. In some cases, IUU fishers are associated with crimes including drugs, weapons and human rights abuses.

The problem stands to worsen. Climate change is expected to decrease the quantity of fish available globally and alter where they can be caught. At the same time, global consumption and demand for seafood is projected to increase by 20% (30 million tonnes) by 2030, particularly in developing nations. Conflicts over increasingly scarce resources have already begun, such as in Sierra Leone, where skirmishes between artisanal fishers and larger IUU trawlers are common.

That’s the bad news. The good news is that we have a suite of tools with which to take on IUU fishers.

There Are More Tools than Ever Before to End IUU Fishing

A new paper prepared as an input to the High Level Panel for a Sustainable Ocean Economy shows that major strides in regulation, technology and cooperation are underway to curb illegal fishing.

The European Union has enacted robust legislation over the past decade to close markets to illegally harvested fish, and other nations are improving their legislation and regulations. The global law enforcement body Interpol now has a special unit to help countries identify and capture offenders. Countries like Thailand, Indonesia and Spain are dealing heavier penalties to IUU fishing vessels. And great advances in technology such as machine-learning and satellite data on vessel movements make it easier to spot suspected wrongdoing. 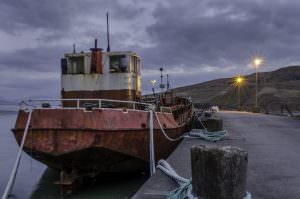 The obvious problem with trying to police the ocean is that it covers 70% of the planet. Few, countries have the resources to effectively monitor and enforce their own waters, let alone the high seas. But coastal states have the opportunity to patrol who can use their ports, which brings the fight against IUU fishing to the land, and within reach.

To that end, one of the most significant recent developments in curbing IUU fishing is the 2016 Port State Measures Agreement (PSMA). The only binding international agreement focused on combatting IUU fishing, it sets minimum standards and processes that ports need to apply when foreign vessels seek entry – whether to offload catch, refuel or make repairs. Any vessel suspected of IUU fishing practices can be inspected or denied access to port. Nothing deters a thief better than not being able to offload the goods.

But the PSMA isn’t yet as effective as it needs to be.

For one, only 64 countries have adopted it. For it to be truly effective, all countries with ports must join and apply the system uniformly.

Under the PSMA, officials check fishing vessels’ permits and records whenever they request entry to dock, but all too often, information is missing or conflicting. Illegal fishers frequently switch vessels names and flags before they come to port so that their records can’t be traced. And with pressure on to unload the fish, the time to dig into a vessel’s background is short. Despite all the progress made, the global fishing fleet is dogged by a lack of required, uniform, robust vessel identification and activity information. Port inspections are less expensive and safer than monitoring, pursuing, and inspecting vessels at sea, but it does still require adequate investment in people, technology and training to track this information and share it effectively across relevant agencies and countries.

What if instead of expending precious resources running down bad actors, authorities focused more on rewarding good ones?

We could learn from “trusted traveller” border control programs, which operate in Canada, Germany, Japan, the U.S. and UK, among others, and allow low-risk travellers expedited clearance upon arrival in a country, with trusted travellers often exempt from routine questioning. A similar process could apply to fishing vessels, with pre-screened, compliant ones being fast-tracked, while those with a record of infringements or missing paperwork face automatic scrutiny and a possible bar on entry. This is wholly in line with the principles of the PSMA, but reverses the burden of proof: Operators must prove they are compliant.

By applying this ‘trusted traveller’ -like principle, vessels would be required to put in place elements that speed up the checks needed to enter port, such as on-board signal systems that publicly tracks their journey and activities. Ports themselves would also need to implement measures for document checking and inspection.

By adopting these cost-effective measures, illegal fishers that often switch vessels’ names and flags or turn off trackers to mask activity would immediately be considered suspicious. Port officials would also have more time to scrutinize potential IUU fishers by automatically greenlighting compliant fishers.

Countries may miss this year’s deadline for ending unsustainable fishing, but 2020 should serve as the moment to focus minds sharply and secure commitments. The explosion in new data on the ocean has created enormous potential for advances in our understanding and stewardship of ocean resources and countries must take the opportunity to make this information widely known, applied and available. Adopting radical global transparency, concerted international cooperation, and stringent, uniform entry requirements at all ports is the formula for ending the great ocean heist.

A Call for Collaboration to Tackle Forced Labor in Fishing