Indonesia Makes its Fishing Fleet Visible to the World

Indonesia Makes its Fishing Fleet Visible to the World

This week, at the United Nation’s Ocean Conference, the Republic of Indonesia becomes the first nation ever to publish Vessel Monitoring System (VMS) data revealing the location and activity of its commercial fishing fleet. The new data being made public on the Global Fishing Watch public mapping platform reveals commercial fishing in Indonesian waters and areas of the Indian Ocean where it had previously been invisible to the public and other nations.

Susi Pudjiastuti, the Minister of Fisheries and Marine Affairs for the Republic of Indonesia, is taking a bold step toward increasing transparency in her country’s fishing industry. Today she urges other nations to do the same.

“Illegal fishing is an international problem, and countering it requires cross border cooperation between countries,” says Minister Susi. “I urge all nations to join me in sharing their vessel monitoring data with Global Fishing Watch. Together, we can begin a new era in transparency to end illegal and unreported fishing.”

Also at the UN Ocean’s Conference, Global Fishing Watch has committed to host any country’s VMS data, calling on other governments to follow Indonesia’s lead. “We believe publicly shared VMS will become a powerful new standard for transparent operation in commercial fishing,” says Paul Woods, Global Fishing Watch CEO and Chief Technology Officer for SkyTruth, a founding partner of Global Fishing Watch along with Oceana and Google. “SkyTruth has been collaborating with the Indonesian government for the past two years to really understand their VMS data and find new ways for VMS to enhance their fisheries management.”

“We applaud the commitments made by Peru and Indonesia to publish their previously private vessel tracking data and encourage other countries to follow their lead,” said Jacqueline Savitz, Senior Vice President for the United States and Global Fishing Watch at Oceana. “Together, with forward-thinking governments like these, we can bring even greater transparency to the oceans. By publishing fishing data and using Global Fishing Watch, governments and citizens can unite to help combat illegal fishing worldwide. With more eyes on the ocean, there are fewer places for illegal fishers to hide.”

Global Fishing Watch uses publicly broadcast Automatic Identification System (AIS) signals from ships at sea to reveal the activity of the majority of all industrial-sized commercial fishing vessels (those exceeding a capacity of 100 Gross Tons which average around 24 meters). The inclusion of government-owned VMS data adds detailed information on smaller commercial fishing vessels that are not required to carry AIS, and are therefore not reliably trackable by any other means. Indonesian regulations require VMS on fishing vessels with a capacity equal to or exceeding 30 Gross Tons (averaging about 16 meters or more).

Indonesia is the second-largest producer of wild-caught seafood in the world, and Indonesian VMS alone adds nearly 5,000 fishing vessels to Global Fishing Watch’s existing database of 60,000 vessels. “It’s remarkable to see how adding in all these medium sized vessels with VMS really fills in the picture for large chunks of the ocean where we knew there was fishing, but just couldn’t see it with AIS alone,” says Woods. “It is also revealing new areas where we weren’t aware fishing occurs.” 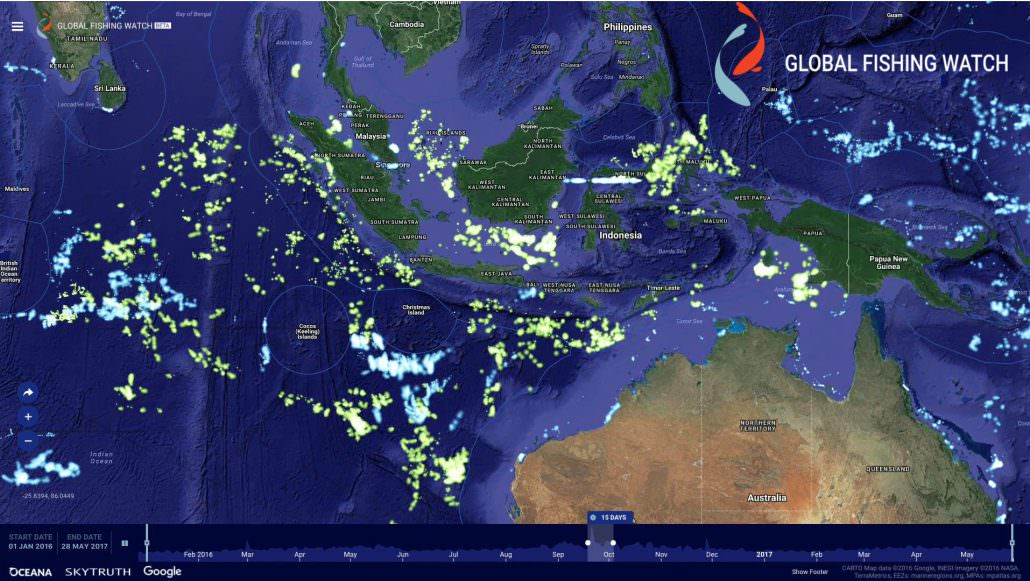 Google’s lead on Global Fishing Watch, Brian Sullivan, says that the platform is built using the latest cloud and machine learning technologies and can easily incorporate additional data sources or methodologies. “The ability to scale rapidly as new countries and providers join means we can move from raw data to quickly producing dynamic visualizations and reporting that promote scientific discovery and support policies for better fishery management,” he said. “With Indonesia and Peru, two of the world’s top five fishing nations, committed to a new age of transparency in the fishing industry, Google is committed to fostering international cooperation.”

Because fishing occurs over the horizon and out of sight, the industry remains one of the most opaque in the world. The lack of knowledge about how much fish is being taken from the ocean, and who is fishing where severely hinders effective management. It also facilitates rampant Illegal, Unreported and Unregulated (IUU) fishing that threatens fish stocks, food security and the economies of coastal nations that depend on seafood for food, jobs and foreign export dollars.

Gains in transparency through the sharing of government VMS data will not only curb IUU, but will benefit the fishing industry as public demand for information about the source of their seafood increases and open data sharing through Global Fishing Watch provides validation of product source.

These partnerships with Indonesia and Peru set a new bar for transparency at sea. Making this data publicly available will support regional cooperation in monitoring, surveillance and enforcement, reduce opportunities for corruption, and enable more informed management decisions.

In addition to committing to support any nation willing to share its VMS data publicly, Global Fishing Watch joined 50 members of the tuna industry and 17 other civil society organization to endorse the World Economic Forum Tuna Traceability 2020 Declaration made at the UN Oceans Conference.

*SkyTruth’s work with the Indonesian Ministry of Fisheries and Marine Affairs has been made possible through support from the Packard Foundation and the Walton Family Fund.