Mystery Solved: Where Albatrosses and Fishing Vessels Meet at Sea

Mystery Solved: Where Albatrosses and Fishing Vessels Meet at Sea

It is the quintessential herald of a fishing vessel on the horizon: a swarming congregation of seabirds, gliding and diving in the distance, sun glinting on white wings as a cacophony of cries echoes across the water. Picturesque as it may be, the scene represents one of the largest threats to the survival of many seabirds.

In their attempt to procure an easy meal from a fishing vessel’s baited lines, loaded nets and discards, birds are often entangled or hooked in fishing gear. Known as bycatch, accidental entrapment of unwanted marine life is estimated to account for between 160,000 and 320,000 seabird deaths every year.

Among the most affected are albatrosses, the signature birds of the sea best known perhaps for the largest among them, the great albatrosses whose wingspans can exceed 11 feet. Of the 24 species of albatross, 21 are included on the IUCN Redlist as ranging from near threatened to critically endangered. Fisheries bycatch is recognized as the main threat to these birds.

Henri Weimerskirch has been working to understand and tackle the problem for more than 25 years. A zoologist and marine ecologist with the French National Center for Scientific Research, Henri studies Albatross foraging behavior and the impact of human activities, especially fishing, on their populations. 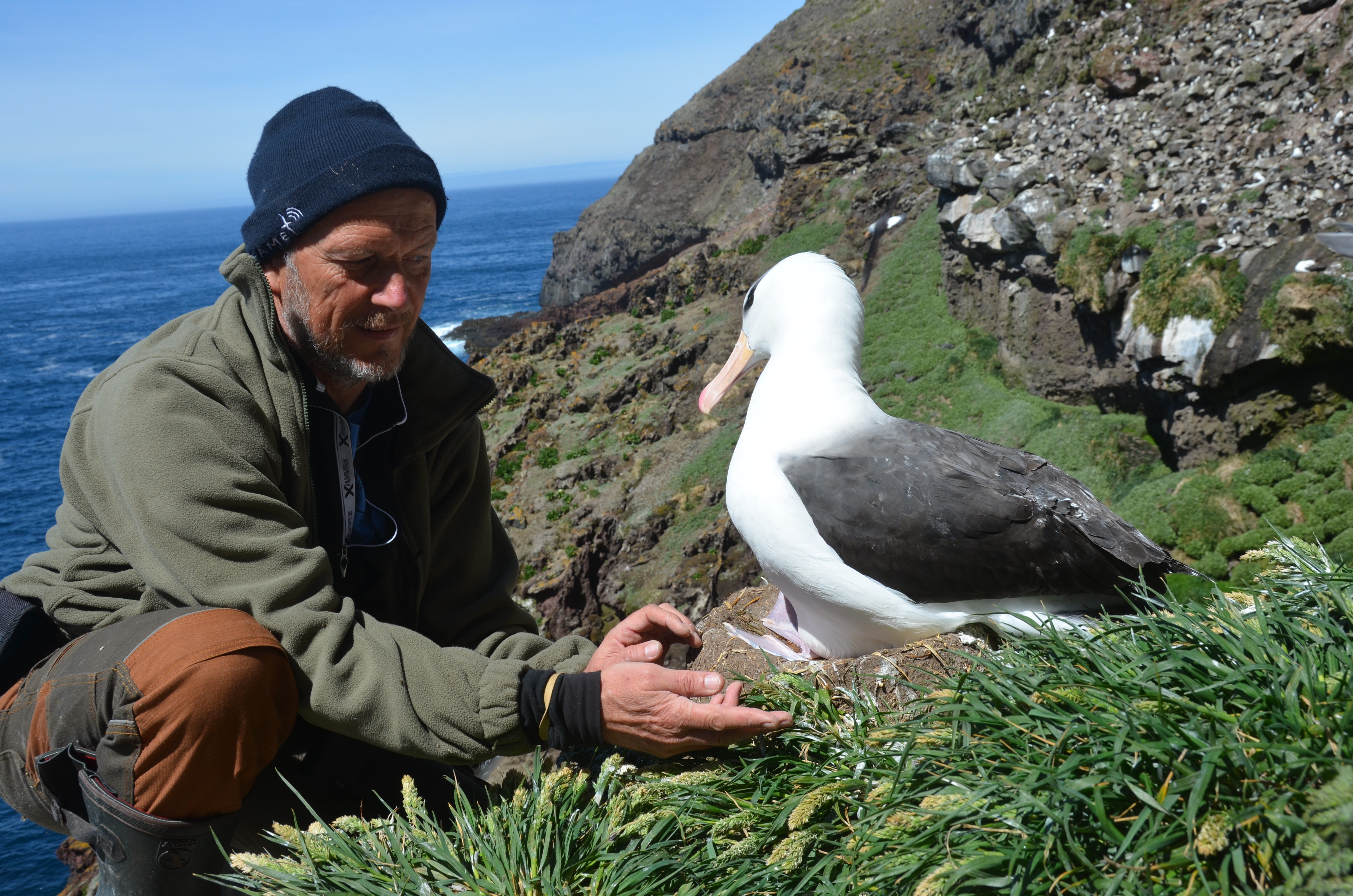 The launch of Global Fishing Watch in September gave Weimerskirch a whole new window on the lives of his study subjects. For the first time, he is able to identify individual boats that albatross interact with on the high seas when they’re far out of range of traditional tracking technologies.

Weimerskirch and his colleagues have previously fitted brown-browed albatrosses from the French Subarctic Islands with radar-detecting GPS data-loggers. The GPS told the researchers where the birds were, and the radar detectors told them when the birds were near vessels.

By matching their data with Vessel Monitoring System (VMS) data provided by the French Government, the scientists were able to identify which boats their tagged birds interacted with while in the Exclusive Economic Zones (EEZs) of Crozet and Kergulean islands. It turns out, 80 percent of the birds spent a significant amount of time around fishing vessels.

Unfortunately, their ability to match birds to boats ended at the boundaries of those EEZs. “The albatrosses are foraging 95 percent of their time in international waters,” Weimerskirch says. “That’s why for us it’s very important to have information [from Global Fishing Watch] on where they interact with fishing boats outside the EEZs, what kind of boats that are operating, and what are the nations of these boats.”

He plans to use the new information to identify the extent of overlap between fisheries from various nations and specific albatross populations from individual locations. “With this we will be able to say, for example, the Crozet population interacts mainly with the Japanese and Taiwanese fishery in the North,” he says. “We cannot have this information any other way.” 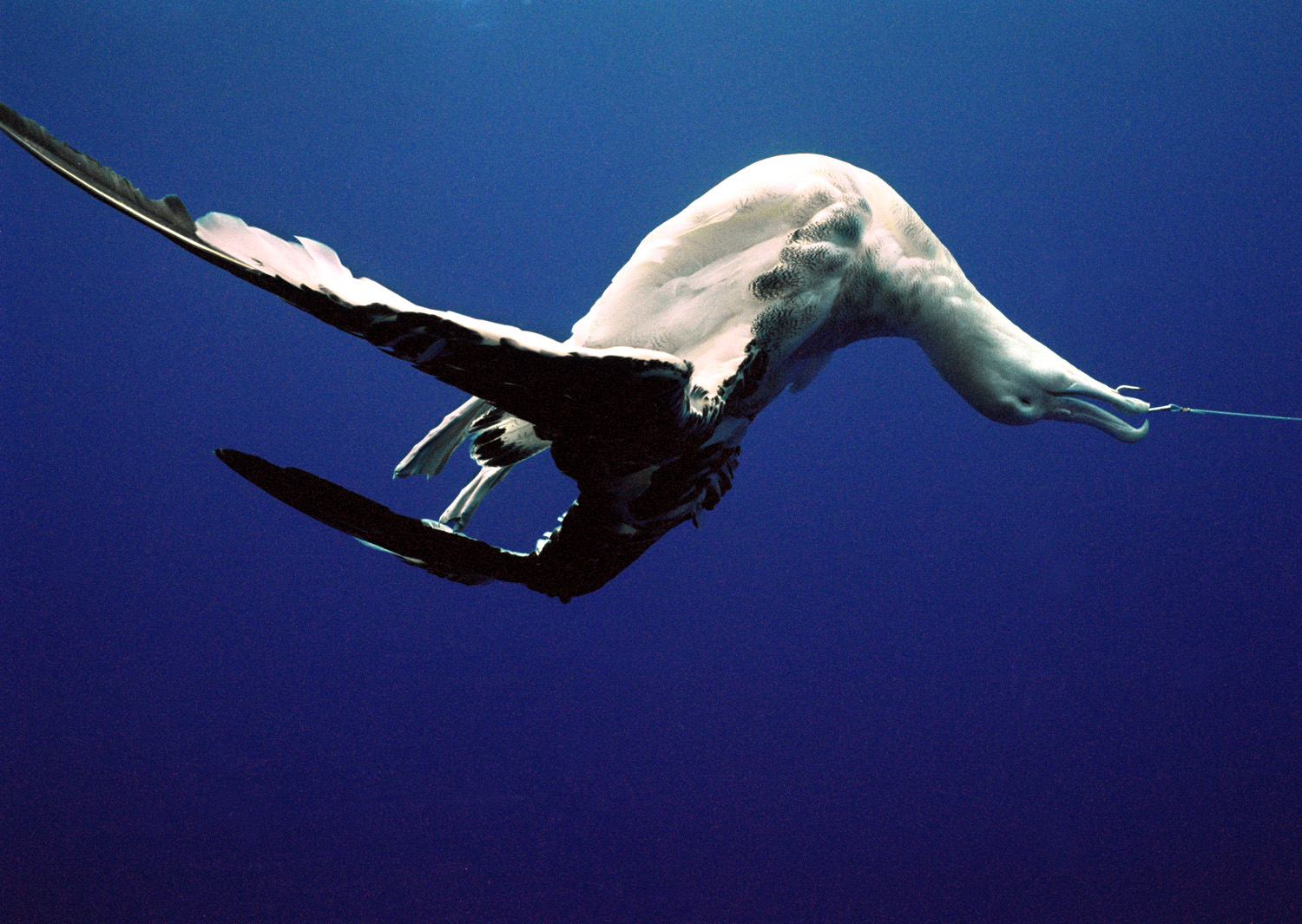 Intent on a quick meal, this albatross ended up on the end of a longline hook intended for a fish. Photo: Guy Marcovaldi/Projet Tamar Brazil

Matching declining bird populations to the specific fleets with which they interact will help focus conservation efforts. For example, longliners have been shown to be particularly hazardous to albatross, but there are multiple measures available to reduce bycatch in longline gear. They include the use of weighted lines that sink more quickly after being deployed. These reduce the time a baited hook remains at the surface where it is available to birds. Tori lines are devices towed behind a vessel to scare and deter the birds. Restricting fishing to nighttime and reducing use of fishing lights as well as refraining from dumping offal and discards while lines are being set are all methods of reducing bird entrapment in fishing gear.

According to Weimerskirch, such measures have helped reduce albatross deaths around Crozet and Kerguelen islands, and they are now compulsory within the EEZs. With this new ability link individual fisheries to vulnerable bird populations on the high seas, the scientists are hopeful that such protections will increase throughout the Albatrosses’ range.