The Ecuadoran government demonstrated a strong commitment to protecting its waters from illegal activity today when it handed down a $5.9 million fine to a Chinese refrigerated cargo vessel owner and a four year prison sentence to its captain for the illegal transport of sharks and shark fins in the protected waters of the Galapagos.

The vessel, Fu Yuan Yu Leng 999 was caught crossing the protected waters of the Galapagos Islands with its illicit cargo on August 13. Authorities and conservation organizations were eager to know where the vessel came from and how they acquired the sharks. Both are questions Global Fishing Watch has been digging into.

Analysts at SkyTruth and Global Fishing Watch analyzed the AIS data to trace the vessel’s whereabouts in the days and months before it was apprehended by the Ecuadoran Navy. The possession of sharks and shark parts is prohibited in the Galapagos Marine Reserve, so the Fu Yuan Yu Leng 999 was in violation of the law by just being there with sharks in her hold.

The AIS data suggests she also may have obtained the sharks illegally. Although shark fishing is still legal in many places, and unregulated on much of the high seas, the data suggests the Fu Yuan Yu Leng 999 collected them from other vessels on the high seas without authorization. Thousands of sharks and shark fins aboard the Fu Yuan Yu Leng 999. (Image appeared in National Geographic News)

Refrigerated cargo ships (known as “reefers”), like the Fu Yuan Yu Leng 999, collect catch from multiple fishing vessels and transfer it to port. It’s called transshipment, and it allows fishing fleets to remain at sea, but it also obscures the source of catch and facilitates the mixing of legal and illegal fish. Using machine learning, Global Fishing Watch has developed algorithms to identify transshipping vessels and transshipment at sea based on distinct vessel behaviors such as rendezvous between fishing boats and reefers that last long enough for catch to be exchanged.

Our analysis of the AIS data shows that between August 5 and 7, just 6 days before crossing into the Galapagos EEZ the Fu Yuan Yu Leng 999 rendezvoused with four Chinese flagged tuna longliners in the equatorial eastern Pacific, 1700 miles from the Galapagos. Each longliner spent about 12 hours moving along with the reefer at a distance of about 30 meters, which indicates the boats were likely tied up. These lengthy rendezvous at sea suggest a substantial transfer of cargo was possible. Prior to arriving in the eastern Pacific, the Fu Yuan Yu 999 was in port in Fuzhou, China, and the AIS data shows no other potential or likely rendezvous or fishing activity during her voyage.

The Inter-American-Tropical-Tuna-Commission regulates the area where the rendezvous occurred, and although shark fishing is legal there, transshipment is only legal under limited circumstances. The Fu Yuan Yu Leng 999 is not on the IATTC’s list of registered carrier vessels, which means any transshipments it would have engaged in were illegal.

These are the fishing vessels the reefer met with (all are authorized by the IATTC to fish in the area, though the reefer is not.)

We did notice some anomalies in the AIS track of the Fu Yuan Yu Leng 999 as the vessel approached and entered the Galapagos EEZ. Some AIS transmission error prevented the vessel’s location from coming through (instead the default error position Latitude: 91 Longitude:181 was displayed). While these errors are relatively common in AIS tracks it did result in gaps of several hours for this vessel. However we did check the distance across these gaps and found that the vessel appeared to maintain its normal transit speed of around 10 knots, making it unlikely the vessel stopped in the area to rendezvous for a transshipment.

Tracing the paths of the fishing vessels the Fu Yuan Yu Leng 999 met with in the eastern equatorial Pacific will reveal where the sharks were likely caught, providing a direct link between a lack of regulation and the capture of thousands of sharks. Understanding that link, and learning where sharks are experiencing heavy fishing pressure might suggest targets for future conservation efforts.

Read more details about the AIS analysis on our partner SkyTruth’s blog. 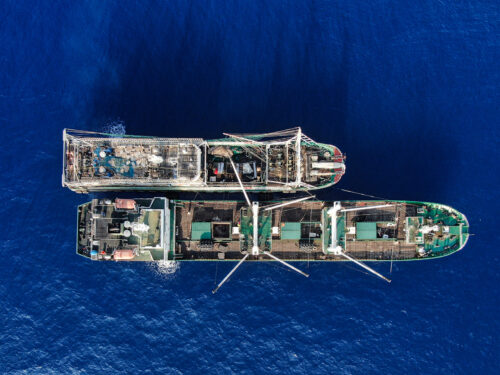 Contributions from the Ground Can Strengthen New Transshipment Guidelines 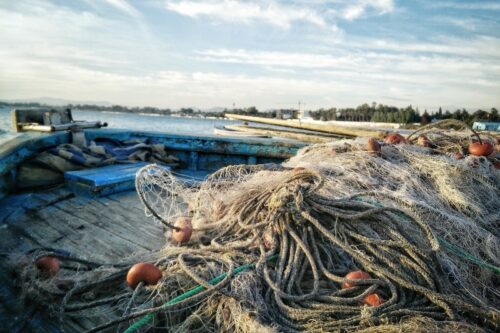 Technology for Transparency: Fishing and marine management in the Mediterranean region