Octavio Aburto of Scripps Institution of Oceanography (left) and his colleagues, Juan Mayorga of UC Santa Barbara and Enric Sala of Pristine Seas are using Global Fishing Watch to understand the economic impacts of establishing a new Marine Protected Area in Mexican waters.

[UPDATE: On October 5, 2017, the Mexican government announced its intent to expand the Revillagigedo marine park into the largest protected area of its kind in North America. We are extremely proud that Global Fishing Watch contributed to this effort. Follow the link at the bottom of the page to read about the October 5 announcement.]

Fishermen and scuba divers have at least one thing in common: they like to go where the fish are. But because their goals are very different, policymakers are often challenged to balance their competing interests. Divers worry fishermen will scoop up all the scenery, and fishermen worry divers will push them out of fertile fishing grounds.

As with many issues surrounding shared resources and territory, policy decisions often hinge on economics: who brings in more to the economy and who will suffer the greatest economic impact of a policy change? But the economics of fishing on the oceans are fuzzy. So scientists have recently turned to Global Fishing Watch to answer questions about how much fish is being caught where, and the economic impacts of creating a marine protected area in the Eastern Tropical Pacific.

About 500 miles southwest of Cabo San Lucas, Mexico, the Revillagigedo Archipelago (A.K.A. Socorro Islands) is home to an abundance of resident giant oceanic manta rays, sharks and other large ocean fish. The diversity and abundance draws divers and snorkelers from around the world and underpins a tourism industry worth an estimated $14 million US dollars to the Mexican economy every year.

That’s why Octavio Aburto, assistant professor at Scripps Institution of Oceanography, and his colleagues from U.C. Santa Barbara and Pristine Seas are arguing for the enlargement of an existing marine protected area around the islands. It would increase the protected area from the current 54,700 to 107,600 square miles and close off nearly nine percent of Mexican waters to fishing. 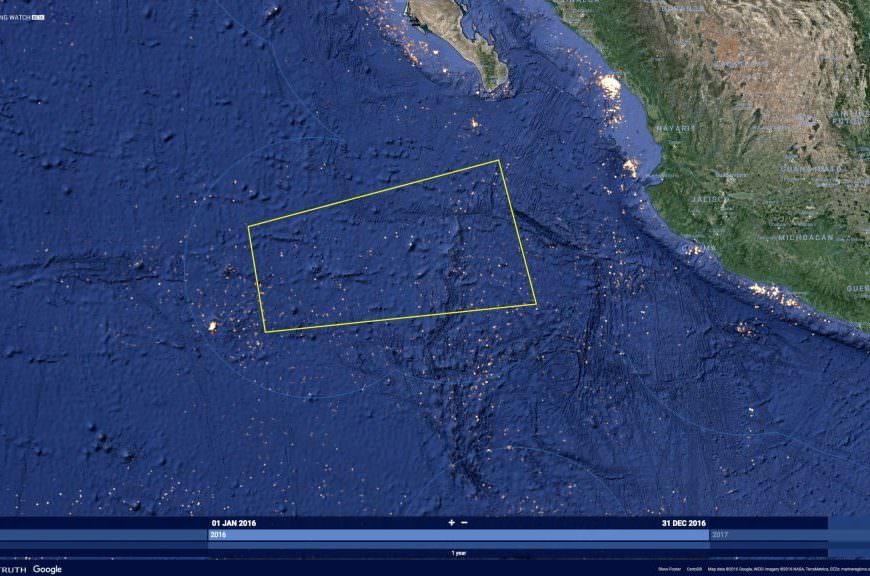 This Global Fishing Watch map shows fishing activity [lighted dots] within and around the proposed
Revillagigedo Marine Protected area [outlined in yellow] off the west coast of Mexico.

The conundrum is that fishers are also drawn to those waters for their abundance, especially Mexican purse seiners targeting tuna and other open water species that support an important fishery industry in Mexico. But fishing gear often entangles large pelagic species such as sharks and rays. Scientists and conservationists are concerned that if the fishery continues operating around the islands, it could potentially reduce the abundance of marine life that supports tourism.

Naturally, the tuna fleet isn’t keen to give up so much fishable area, because they believe it could reduce their annual harvest.

To help put the economic impact in perspective and provide hard numbers for Mexican officials, the scientists used Global Fishing Watch to compare how much the fleet fishes inside the proposed MPA with how much they fish throughout the rest of the Eastern Tropical Pacific. The team then estimated the amount of catch from inside and outside the proposed boundaries and calculated its dollar value.

Their results showed that roughly 10 percent of the Mexican purse siene fleet’s harvest is caught within the proposed MPA boundaries. It amounts to about $8 million worth of fish annually. That’s less than the $14 million brought in by tourism, but it’s also a small enough percentage of the fleet’s total catch, and the scientists argue it can be made up elsewhere.

Previous efforts to increase the size of the Revillagigedo Archipelago MPA were shut down by fishing industry claims that they would suffer economically. Until now, the Mexican government has had only that side of the story. Aburto says the fishing data provided by Global Fishing Watch, and the economic analysis it enabled, has opened up the discussion. Late last year, he and other researchers began the first productive meetings with four top government officials (the minister of the environment, the minister and the commissioner of agriculture and fisheries, and the commissioner for marine protected areas). Aburto has high hopes that transparency and data have given them the leverage they need to prevail.

Read the update at National Geographic: Largest Marine Protected Area in North America to Be Created off Mexico.