Exclusive Economic Zones (EEZs) are perhaps the largest property rights institution in the world, covering about 39% of the ocean’s surface and accounting for more than 95% of global marine fish catch. Because assigning property rights can improve both ecological and economic outcomes, EEZs could be an important institution for improving the sustainability and profitability of global fisheries.

However, while the size of EEZs increases their potential benefits, it also increases their enforcement costs. High enforcement costs could enable unauthorized fishing inside EEZs, undermining their potential benefits. But until Global Fishing Watch made AIS-inferred fishing activity publicly available, it was impossible to test whether unauthorized fishing inside EEZs is deterred.

Countries have the exclusive right to manage and use all natural resources within their EEZ, including fish, minerals, oil, and natural gas. Countries can prohibit foreign vessels from fishing in their EEZs or they can authorize certain types of foreign fishing in exchange for payment by foreign vessels or governments.

In a new paper in Nature Sustainability, I test whether unauthorized foreign vessels are deterred from fishing inside EEZs using GFW data and by exploiting the ecologically arbitrary boundaries that divide EEZs from the high seas. The maximum width of EEZs with respect to fisheries—200 nautical miles from a country’s coast—is a historical accident. Because this boundary is arbitrary with respect to fish distributions, fishing vessels close to the boundary face identical fishing opportunities on either side except that on one side, all natural resources belong to a single nation (EEZs), and on the other side they do not (the high seas). Consequently, the effect of EEZs on unauthorized foreign fishing is the difference in unauthorized foreign fishing just inside EEZs compared to just outside EEZs. This type of research design is called a “regression discontinuity”. 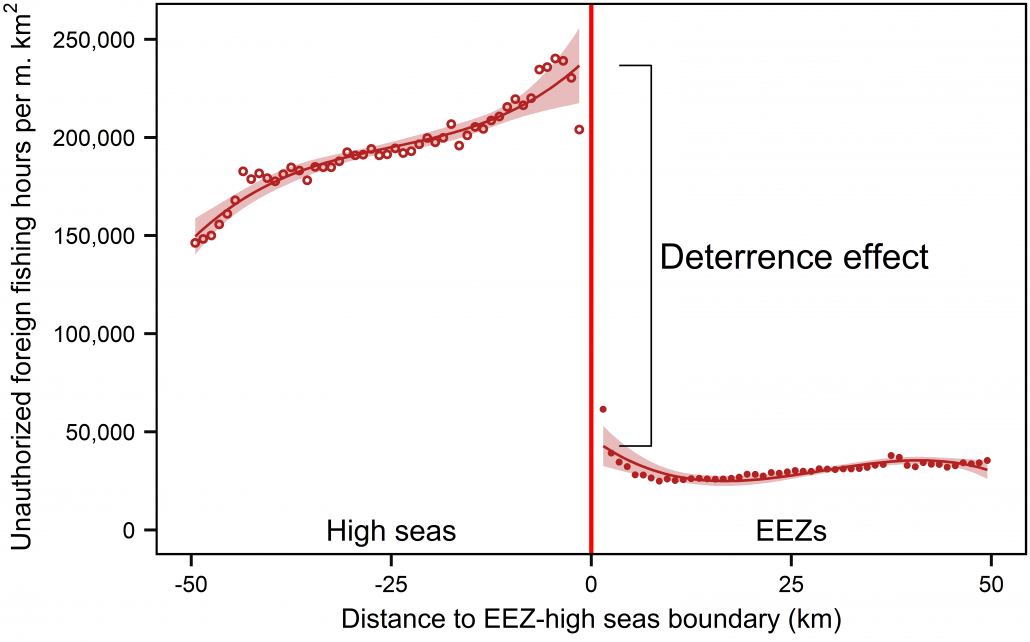 The existence of a global deterrence effect implies that at least some countries enforce their EEZs despite the high cost of doing so. Otherwise, there would not be a global deterrence effect because fishing opportunities for unauthorized foreign vessels would be identical just inside EEZs compared to just outside EEZs. To understand which specific countries enforce their EEZs and deter unauthorized foreign fishing, I estimate an individual deterrence effect for each EEZ-sea region in the next figure. EEZs that occur in multiple oceans or seas, such as the part of the Canadian EEZ in the Atlantic Ocean and the part in the Pacific Ocean, are analyzed separately to avoid comparing fishing in different ecosystems.

Most Exclusive Economic Zones do not deter unauthorized foreign fishing

I find that 10 EEZ-sea regions account for 97% of the global deterrence effect. These EEZ-sea regions belong to Argentina, Iceland, Norway, the Faroe Islands, the Falkland Islands (islas Malvinas), Canada, the Marshall Islands, and Peru. Vulnerable species that occur in these EEZ-sea regions, such as Argentine Angelshark, Greenland Shark, and Atlantic Halibut, are being protected by the existence of EEZs. 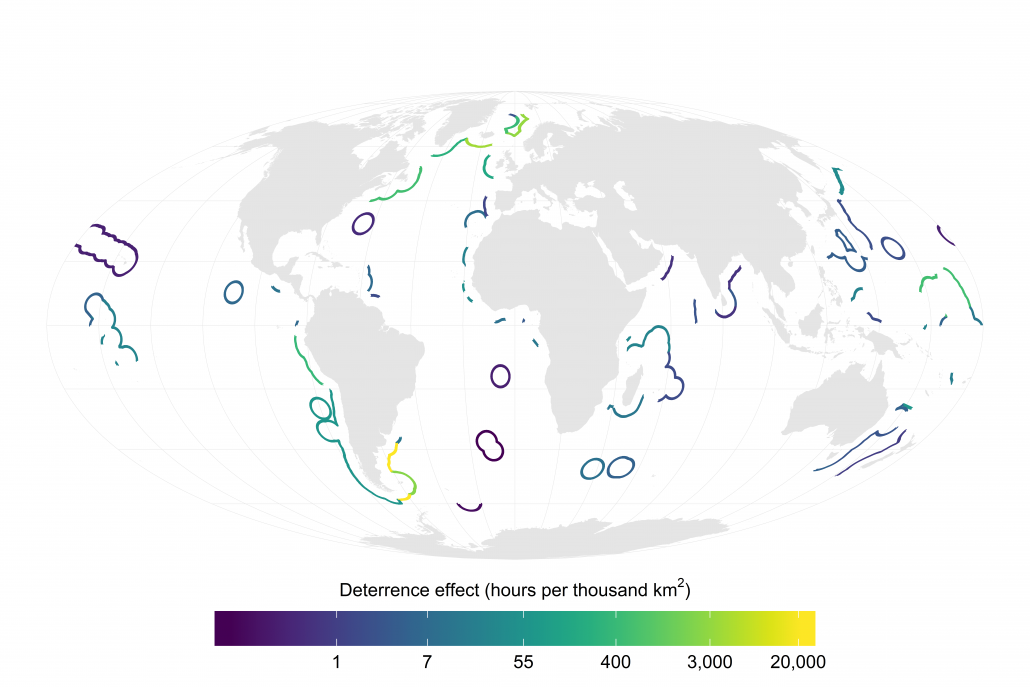 To explain these results, I show that the EEZ-sea regions that deter unauthorized foreign fishing are those that are most valuable near their high seas boundaries (according to a proxy for fishery value I describe in the paper). These results are consistent with countries choosing enforcement levels by comparing the benefits of enforcement (e.g., more fish for domestic and authorized foreign fishers to catch) with the costs (e.g., spending on patrol vessels and aircraft).

If enforcement levels depend on the costs and benefits enforcement entities yield from enforcement, these results could have implications for the design of other conservation and management institutions. For example, recently proposed marine protected areas on the high seas would be even more expensive to enforce than EEZs due to their remoteness and may offer fewer direct benefits to enforcing entities because of restrictions on catch. Consequently, they might not incentivize enough enforcement to deter illegal fishing, limiting their ecological and economic benefits. Just as economic incentives matter for individual fishers, the incentives for enforcement faced by resource managers shape enforcement decisions and conservation outcomes.

Funding acknowledgement: This research was generously supported by NOAA Fisheries and Sea Grant. The views expressed in this blog are those of the author.