The First-Ever Global View of Transshipment in Commercial Fishing

The First-Ever Global View of Transshipment in Commercial Fishing

Hidden No More: The First-Ever Global View of Transshipment in the Commercial Fishing Industry

Transshipment, the transfer of goods from one boat to another, is a major pathway for illegally caught and unreported fish to enter the global seafood market. It has also been associated with drug smuggling and slave labor. Illegal in many cases, transshipment has been largely invisible and nearly impossible to manage, because it often occurs far from shore and out of sight. Until now.

Today, with the release of our report, The Global View of Transshipment: Preliminary Findings, we present the first-ever global footprint of transshipment in the fishing industry. The report explains how data scientists from SkyTruth and Global Fishing Watch (a partnership of Oceana, SkyTruth and Google) analyzed Automatic Identification System (AIS) signals from ships at sea to developed a tool to identify and track 90 percent of the world’s large refrigerated cargo vessels, ships that collect catch from multiple fishing boats at sea and carry it to port.

According to the analysis, from 2012 through 2016, refrigerated cargo vessels, known as “reefers,” participated in more than 5,000 likely transshipments (instances in which they rendezvoused with an AIS-broadcasting fishing vessel and drifted long enough to receive a catch). In addition, the data revealed more than 86,000 potential transshipments in which reefers exhibited transshipment-like behavior, but there were no corresponding AIS signals from fishing vessels. Brian Sullivan, Google’s lead for Global Fishing Watch, will present the findings at the Economist World Ocean Summit in Indonesia today. The report, along with the underlying data and our list of likely and suspected transshipments, will be freely available on our website, globalfishingwatch.org.

The global scale of transshipment and its ability to facilitate suspicious activity, such as illegal fishing and human rights abuses, is exposed in a complementary report being issued today by our partners at Oceana. The opportunity for mixing legal and illegal catch during the collection of fish from multiple fishing boats provides an easy route for illegal players to get their product to market. This obscures the seafood supply chain from hook to port and hobbles efforts at sustainability because it prevents an accurate measurement of the amount of marine life being taken from the sea.

Among the many findings, Global Fishing Watch data documents that transshipment in offshore coastal waters is more common in regions with a high proportion of Illegal, Unregulated and Unreported (IUU) fishing than in regions where management is strong such as in North America and Europe. The data also revealed clusters of transshipment along the Exclusive Economic Zones (EEZs) of some countries, and inside those zones of nations rated strongly for corruption and having limited monitoring capabilities. “These correlations do not provide any proof of specific illegal behavior,” says Global Fishing Watch Research Program Director, David Kroodsma, and lead author on the report, “but they raise important questions and can lead to more informed international efforts by fisheries management organizations to prevent or better regulate transshipment.”

According to Oceana’s report, three of the top eight countries visited by reefers have not yet ratified an international treaty meant to eliminate illegal, unregulated and unreported fishing, and therefore may have weaker regulations that would make it easier for illegally caught fish to enter the global marketplace. The report calls for the banning of transshipment at sea and expanded mandates for unique identifiers and vessel tracking for fishing vessels. Currently AIS is not required on all commercial vessels.

The new analytical tools SkyTruth and Global Fishing Watch have developed using public domain AIS data can enable fisheries managers to identify and monitor transshipment anywhere in the world, permanently lifting the veil from the previously invisible practice of transshipment.

The results were obtained through an analysis of over 21 billion satellite signals from Automatic Identification System messages broadcast by ocean-going vessels between 2012 and 2016. Using an machine learning system developed by Global Fishing Watch, Kroodsma’s team identified refrigerated cargo vessels based on their movement patterns. Verifying their results with confirmed fishery registries and open source online resources, they identified 794 reefers. That represents 90 percent of the world’s reefer vessels identified in 2010 according to the US Central Intelligence Agency World Factbook. Through further analysis, they mapped 5065 instances in which a reefer and a fishing vessel were moving at a certain speed within a certain proximity to one another for a certain length of time.) Our algorithm was verified by matching a subset of these “likely transshipments” to known transshipments recorded by fishing registries. The data also revealed 86,490 potential transshipments, instances in which reefers that appeared to be alone traveled in a pattern and at a speed consistent with transshipment. Their activity cannot be verified, but given that many fishing vessels turn off their AIS device when they do not want to be detected, and some fishing vessels do not have AIS, these events must be considered potential transshipments.

This work was supported by a grant to SkyTruth from the Walton Family Foundation and made possible by Google through the in-kind use of Google’s cloud computing platforms and technical and project guidance.

The free report and associated datasets are available at https://GlobalFishingWatch.org/data. 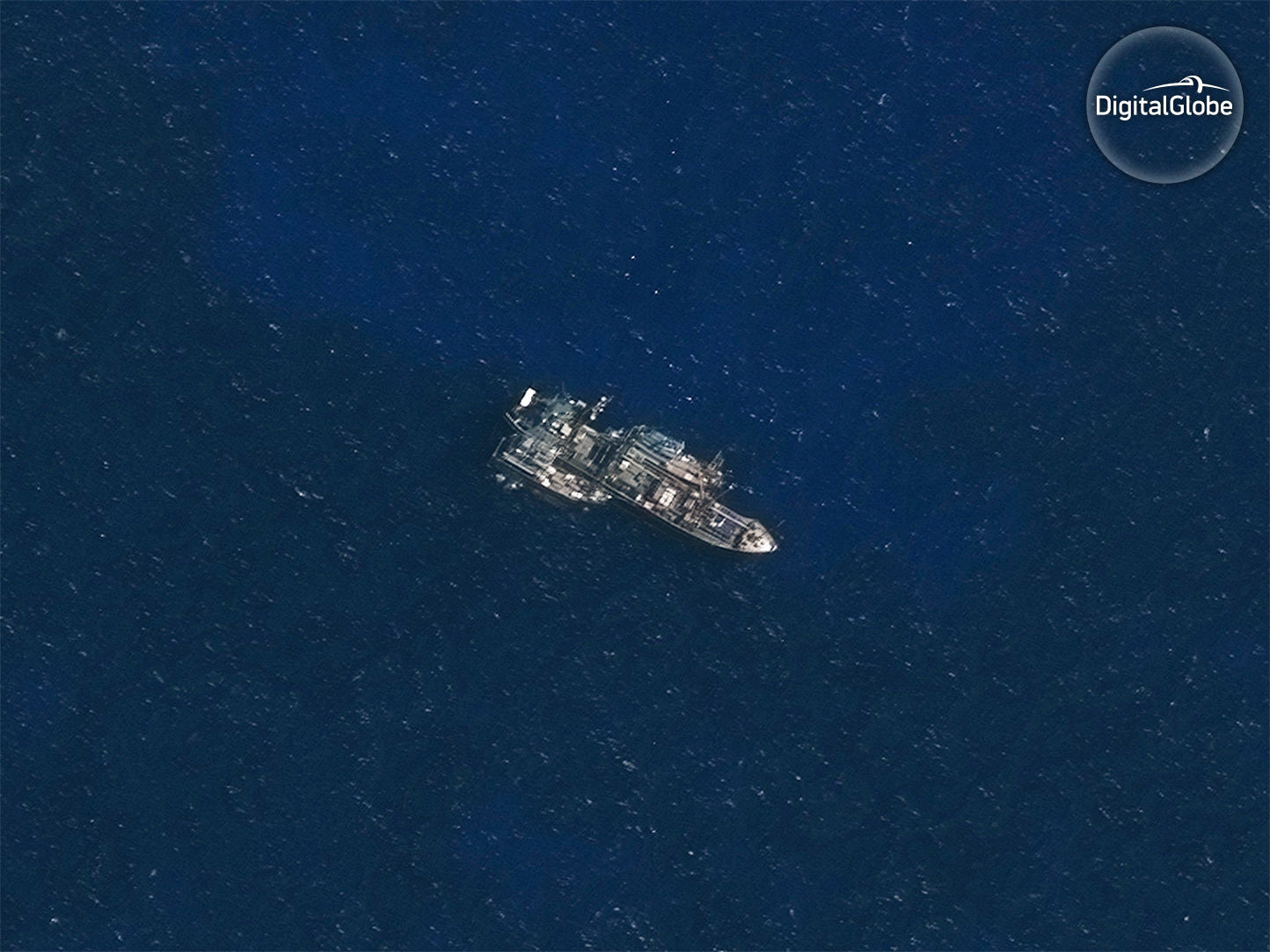 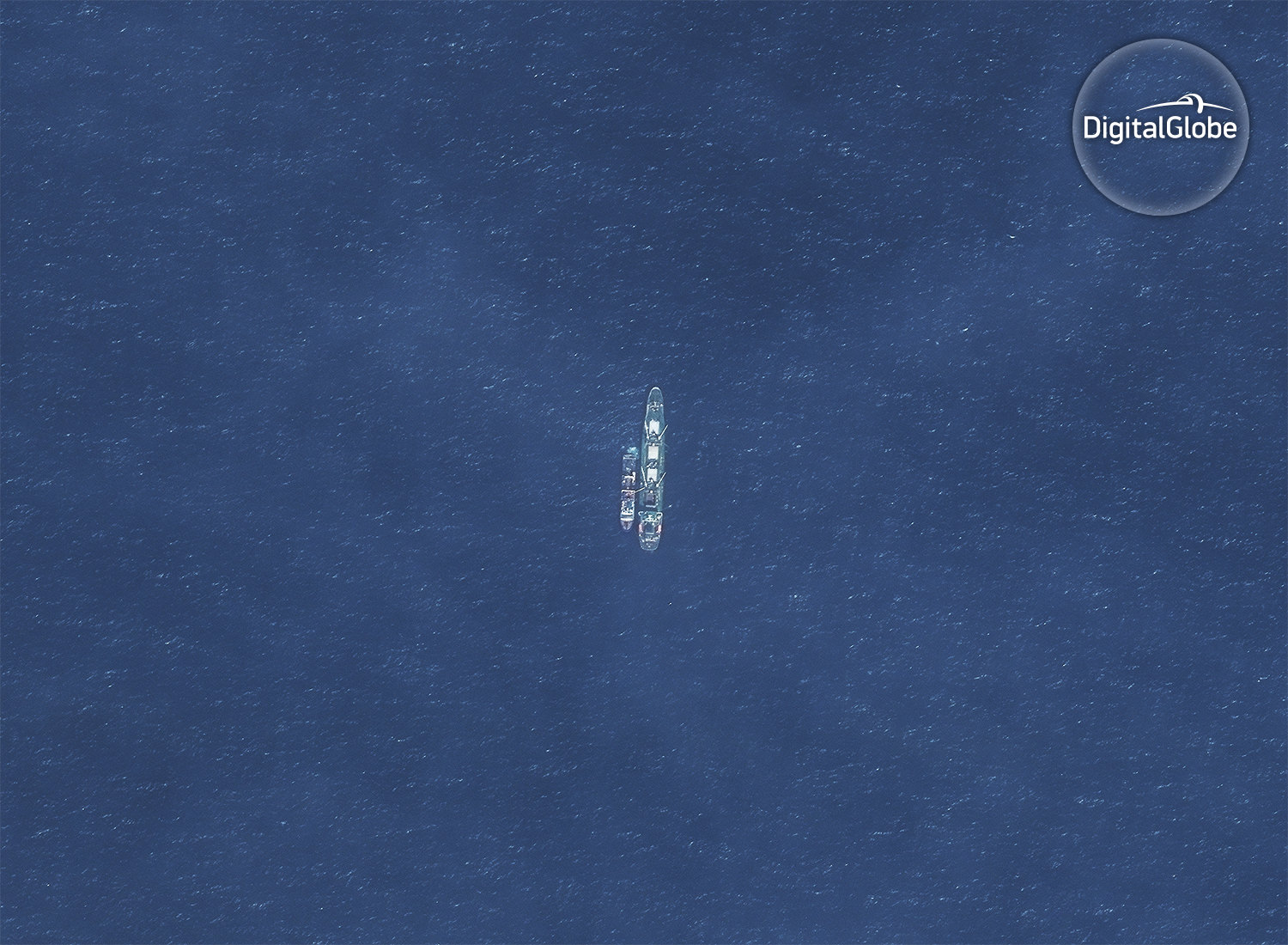 CAPTION: The Hai Feng 648 is with an unidentified fishing vessel off the coast of Argentina. There is a large mostly Chinese squid fleet just beyond the EEZ boundary. The Hai Feng 648 was previously with the squid fleet at the edge of the Peruvian EEZ and in 2014 took illegally processed catch from the Lafayette into port in Peru. This image was acquired on Nov 30, 2016.

Learn about a complementary report released today by our partners at Oceana.

Read more about the images above and how our partners at SkyTruth captured the images of a Thai reefer in a likely transshipment in a remote part of the Indian Ocean.

Oceana is the largest international advocacy organization dedicated solely to ocean conservation. Oceana is rebuilding abundant and biodiverse oceans by winning science-based policies in countries that control one third of the world’s wild fish catch. With over 100 victories that stop overfishing, habitat destruction, pollution and killing of threatened species like turtles and sharks, Oceana’s campaigns are delivering results. A restored ocean means that one billion people can enjoy a healthy seafood meal, every day, forever. Together, we can save the oceans and help feed the world. To learn more, visit www.oceana.org.