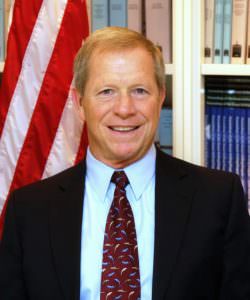 Jonathan White is a retired Rear Admiral for the United States Navy and the President and CEO of the Consortium for Ocean Leadership.

Out of sight – out of mind. If you don’t see the ocean outside your window every day, it’s easy to forget how much we depend on it – from the oxygen we breathe (every other breath can be attributed to photosynthetic activity by marine phytoplankton) and the food we eat (or the food the food we eat eats – even cows are fed fish byproducts), to daily weather forecasts and medical advancements (such as blood pressure medication). We owe the life we live here on Earth today, and hopefully will live tomorrow, to the ocean. And it is not just for the everyday basics, like oxygen.

Our national, economic, and food security depend on the ocean, and all three of these parts of “ocean security” are threatened by rampant illegal activity that may well jeopardize the interrelated future of our ocean and ourselves.

It’s not often that actions in the far corners of the globe directly affect our nation’s stability, but when they do, it is usually high profile events, such as the threat of nuclear warfare, terrorism, and drug and human trafficking. But there is an illegal activity intricately connected to terrorism and trafficking, and not acting to address it immediately risks our nation’s stability and that of our allies around the globe. Illegal, unreported, and unregulated (IUU) fishing (“pirate fishing”) is a threat whose consequences are not fully understood or appreciated by many.

Those familiar with Global Fishing Watch know that when I talk about IUU fishing, I’m talking about violating international laws, agreements, or treaties to illegally catch fish. This can occur in many forms – fishing by foreign ships in another country’s waters, making false reports, using prohibited gear, taking protected species, fishing in closed-off areas or in off-seasons, and more. It’s evident to most that this is a significant sustainability issue, but it is perhaps less clear how it shakes the very pillars of national, economic, and food security worldwide.

So how does what happens on a 17 (or 150+) foot fishing boat on the other side of the world affect our national security? As I said before, IUU fishing doesn’t occur in a vacuum but is instead part of a complex web of transnational criminal activities. IUU fishing vessels help facilitate other illegal actions, such as human, drug, and arms trafficking and smuggling. Trafficking and smuggling are lucrative businesses – while numbers are hard to come by (and can’t all be attributed to IUU vessels), one study found the annual revenue of smuggling activities in the Somalia region alone to be $40 million. The effects of these repulsive trafficking activities aren’t limited to the area in which they occur – proceeds can be used to fund terrorist activities around the world. For instance, drugs carried aboard fishing vessels helped finance the 2004 al-Qaida terrorist bombings in Spain, and IUU fishing has become a sizeable source of income for al-Shabab, a Somali-based terrorist organization linked to al-Qaida. Countries concerned about their national security would be wise to combat IUU fishing – even if they’re across the ocean basin from the illicit activity.

To understand how this imperils economic and food security, one must first appreciate just how important the seafood industry is. Worldwide, seafood accounts for 20 percent of the animal  protein in the human diet. According to the Food and Agriculture Organization of the United Nations, in 2014, global per capita fish consumption rose above 44 pounds per year for the first time, with 93.4 million tonnes caught that year (including from inland waters). Seafood consists of nearly 10 percent of all trade, making it one of the most highly traded foods. In the U.S. alone, the 9.5 billion pounds of fish and shellfish landed by U.S. fishers in 2014 was valued at $5.4 billion, yet over 90 percent of consumed seafood is imported. All this to say, even if you’re an infrequent fish eater, the production of seafood is a growing industry depended upon by billions, both for food and livelihood. Illegal activity has the potential to topple food and economic security by undermining the ability to appropriately mange this resource. 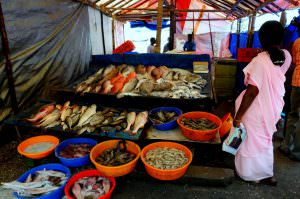 Fishing and seafood are a significant source of revenue and nutrition for many nations and underpin national economic and food security.  (photo:Deba Prasad Roy Marine Photobank)

The economic, food security, and sustainability impacts of pirate fishing are all intertwined. Worldwide, 10-12 percent of jobs are fisheries or aquaculture-related, but developing countries are hardest hit by IUU activities, where fisheries can provide 50 percent of their animal protein. It’s hard to quantify the impacts of the illegal activity without knowing its full extent, but one worldwide analysis put the value of illegal fishing losses between 10 and 23.5 billion annually. Locally, pirate fishers wreak havoc on this industry. Legal local fishers (who number 260 million worldwide) can be outmuscled by illegal fishers (often using slave laborers subject to horrific conditions, including beheadings, shootings, and tossing the sick overboard). In Somalia, there are hard-to-verify reports of illegal fishing by foreign countries forcing their former law-abiding counterparts into a life of piracy for survival.

Countries need to not only have fish to feed and employ their people now but also in the future. Being unable to measure the amount of illegally harvested fish makes the implementation of effective management plans impossible, leading to overfishing and overexploitation. In addition, destructive, illegal fishing methods commonly employed by pirate fishers, such as bottom trawling and dynamite fishing, turn once-healthy habitats into marine deserts that can no longer support life. Thus, a community can lose their food stability and their economic prosperity in one fell swoop as IUU fishing takes hold. The reverberation of collapsed fish stocks will be felt throughout economies worldwide as a once-important trade item dwindles.

Oh, and this food loss ties back into national security – destabilizing a people’s food source is a catalyst for conflict; connections between food scarcity, human migration, and social and political instability are evident throughout history, from the French Revolution to recent events in Syria and the Arab Spring.

IUU fishing’s threat to ocean health, productivity, and sustainable fisheries is exacerbated when combined with other stressors, such as ocean acidification and overfishing. Creating and maintaining sustainable fisheries that are simultaneously being walloped from all sides by a variety of factors is a challenge indeed. How do we go about doing that? How do we gain a better understanding of the ocean and its processes, of fisheries that are on the brink of collapse? And how do we even know where fish are in the 1.3 billion cubic kilometers of water we call our ocean?

The answer lies in ocean science. Increased data, new technology, and data sharing and transparency are all pieces of the puzzle that will help us eradicate IUU fishing. A knowledge of ocean science brings benefits beyond helping address IUU fishing – it will aid in solving big picture problems the ocean faces and will assist our country (and our allies) in regaining the undersea knowledge advantage that has been eroding since helping us win the Cold War.

Check back in next week for Rear Admiral White’s post on specific ocean science and technology solutions that can and must help us fight the global scourge of IUU fishing and make us stronger, safer, and more secure in Part 2: Illegal Fishing – How Ocean Science and Technology Can Address IUU Fishing and Secure National, Economic, and Food Security Worldwide.