Last week, G7 Environment, Energy and Oceans Ministers convened in Halifax, on Canada’s rugged Atlantic coast, to tackle some of the most pressing threats facing our planet. The ministers were tasked with advancing climate action, addressing illegal, unreported and unregulated (IUU) fishing and other drivers of overfishing, cutting plastic pollution in our ocean, and accelerating the clean energy transition. An ambitious agenda, but one Canada has shown real appetite to take on. Prime Minister Trudeau established climate change, oceans and clean energy as a key tenet of Canada’s Presidency of the G7. Among the outcomes of the June G7 Leaders’ Summit was the Charlevoix Blueprint for Healthy Oceans, Seas and Resilient Coastal Communities; the convening in Halifax was tasked with advancing commitments set out in this blueprint.

I was invited to Halifax to represent Global Fishing Watch and chair a session on Sustainable Oceans and Fisheries as part of the Oceans Partnership Summit (OPS), hosted alongside the G7. The OPS is designed to demonstrate that there is a plethora of other actors, who have interest, desire and capacity to bring about positive change in this space.

Session on Sustainable Oceans and Fisheries as part of the Oceans Partnership Summit (OPS), hosted alongside the G7.

More than 200 people joined the OPS, and in our ‘Sustainable Oceans and Fisheries’ session, our panel reflected diverse interests and perspectives – Jean Paul of the Atlantic Policy Congress, Megan Leslie of WWF-Canada, Paul Lansbergen with The Fisheries Council of Canada, Lynn Kavanagh of World Animal Protection and the Global Ghost Gear Initiative, Alexandra Mcgregor of The Assembly of First Nations and Jay Lugar of the Marine Stewardship Council. We discussed how we might best make oceans and fisheries sustainable, in particular addressing how we can increase the availability and sharing of data and relevant science, including the more practical experience of the indigenous people, leverage the agency, leadership and participation of women and indigenous peoples in developing strategies, support strategies to effectively protect and manage vulnerable areas of our oceans and resources and develop stronger public-private partnerships (PPP).  As chair, I had to identify our collective call, which we did through a Q&A session and audience vote, and report in person to ministers the following day. I reported:

I should also note that prior to the OPS session I joined a roundtable led by women and youth looking at the same issues as the G7 ministers. There was an impressive discussion, captured in this blog post.

The G7 meeting made clear their commitment to supporting sustainable oceans and fisheries by combating IUU fishing. They discussed working globally and building stronger public-private partnerships to address this global threat. Canada emphasized its support for combating IUU fishing by announcing that up to $10 million will be invested to support the development and deployment of satellite-based technologies that can remotely identify and track suspected IUU vessels. An additional investment of up to $1.6 million will contribute to the development of regional fisheries intelligence sharing for Western Central Pacific countries to share information, and develop new tools and best practices to eliminate IUU fishing in their waters. 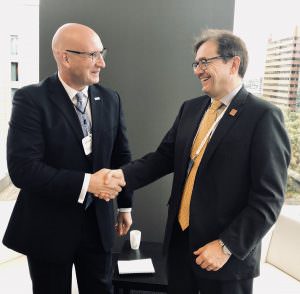 The Government of Canada also declared its support for the work of Global Fishing Watch. Minister of Fisheries, Oceans and the Canadian Coast Guard, Jonathan Wilkinson acknowledged our efforts to advance ocean sustainability and stewardship. The announcement followed an intervention by the head of delegation for Japan to recognise the recent MoU signed between the Japan Fisheries Research and Education Agency (FRA), the Australian National Centre for Ocean Resources and Security (ANCORS) at the University of Wollongong and Global Fishing Watch. The Japanese delegate commended the MoU, initiated to investigate IUU fishing and strengthen transparency and governance of fisheries within the region, as a good example of public data for research.

Canada and Japan have quickly grasped the power and potential of our program and transparency platform, and we very much hope other G7 nations will soon seize the opportunity to  support our open data platform. Our platform offers a practical opportunity for the G7 nations to work together in order to make data available and advance ocean transparency, and as such Canada is considering Global Fishing Watch as a key catalyst for such transparency and information sharing.

Prior to joining G7 meetings, I had the honour of attending the United Nations (UN) as they commenced their historic negotiation on a treaty for the high seas. As a new member of the High Seas Alliance, I was invited to brief interested parties on the technology available to them and highlight some of the strengths and weaknesses. There is much talk of enforcement on the high seas or even banning fishing. Whichever way negotiations lead, delegates should keep in mind that the technology needed to enforce a ban, or to enforce detected non-compliance of any high seas fishery, is very similar and it will take a significant effort by the parties to any agreement. Given the ground-breaking nature of these negotiations, delegates may find that embracing transparency and rewarding compliance is a far more efficient route to understanding what is being fished on the high seas. A vessel that has tracking data missing or other information absent should simply not be allowed to land its catch. Think about it, if you travel and try to enter a country without the right papers, you do not get in, fishing vessels should be no different. Global Fishing Watch is pleased to be a part of the Alliance and looks forward to supporting the members and the UN in their deliberations. The high seas are a global common and a common resource; any extraction of this resource should be common knowledge. I believe that transparency will be a major factor in the success of the treaty and we are ready to demonstrate that technology has evolved to the point that this more global approach is entirely possible.

Between the UN and the G7, I joined Harnessing the 4th Industrial Revolution for the Ocean, hosted by the World Economic Forum at the margins of the official Global Climate Action Summit program. For the oceans, the Fourth Industrial Revolution is first and foremost a data revolution. An explosion of new data sources concerning the oceans is taking place. These streams of data can be translated into new understanding and tools for making this information useful to decision-makers, whether they are ocean managers, fishers, or consumers. The emerging ‘digital ocean’ will have profound implications for every aspect of the ocean challenges humanity faces.

Working to SDG 14, and with Peter Thomson, the UN Secretary General’s Special Envoy for the Ocean, in the room we explored existing and new technological initiatives that are helping address the issues the ocean is facing, from global access to comprehensive data, to blockchain for traceability and machine learning for better monitoring of fishing, shipping, and other activities.  It was clear to me that I was not the only one convinced that technology was now at the point of being a game changer; both effective and affordable.

Next stop, the Indonesian island of Bali, where world leaders, and leading environmentalists, converge in October to pledge their continued effort to protect the ocean and to ensure that when it is fished, it is fished sustainably. Following Our Ocean 2018, onto Kenya for the Sustainable Blue Economy conference, where it will be made clear that the ocean is much more than a pool of animal protein. It must be clear that our ocean plays a fundamental role in the global climate system and in supporting communities, livelihoods, food security, human health, biodiversity, economic prosperity and our way of life. To me that seems like a convincing reason to take very good care of it.