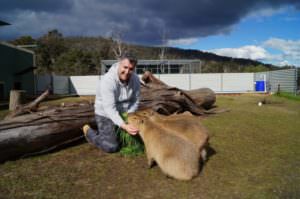 John Marrone, a Tasmanian recreational fisherman, first became interested in Global Fishing Watch after watching a clip of funder Leonardo DiCaprio on a local news network. Upon hearing DiCaprio speak about Global Fishing Watch, Marrone was curious to see if “little Tas” was on our map.

Marrone is one of about 700 recreational fishermen registered in Global Fishing Watch, and like many of them, he is interested in protecting marine environments and curious to see the commercial activity on his home turf. He uses the public map tool to investigate Marine Protected Areas (MPAs) around Tasmania.

“I’ve heard from locals and others that there may be illegal fishing in our MPAs, we have noted on occasion vessels acting suspiciously or loitering within or near MPAs, but it’s difficult for authorities to scope that vast amount of ocean in a systematic manner,” Marrone said. He believes that Global Fishing Watch can enable coastal residents and recreational fishermen, like himself, to monitor their waters like never before.

“About two years ago, a vast group of recreational fishermen got together and attempted to ban super trawlers in Tasmanian waters. After about a year of protests, the ban was passed (and has recently been strengthened by legislation).” For concerned citizens such as this group, Global Fishing Watch can reveal heavily fished areas or help them identify what kind of vessels are fishing in the areas they are concerned. “We can actually pinpoint where that activity is happening,” Marrone says, “It is simply amazing the technology we now have at our fingertips!”