Global Fishing Watch data assists US Coast Guard patrol in the Pacific. The 2019 patrol produced a threefold increase in vessel boardings and an eightfold increase in identified violations compared to 2018.

Captain Adam Morrison has 12 years of experience patrolling the oceans of the world with the United States Coast Guard (USCG) during his 24 year career. He knows all about the challenges of policing vast expanses of open sea, from conducting life-saving search and rescue operations to interdicting human traffickers and drugs runners. But some of his most recent work has been in a growing field in the security of the maritime domain: the analysis of cutting-edge satellite data to help detect and combat illegal, unreported and unregulated (IUU) fishing. And he’s become something of a pioneer.

The USCG’s highest ranking officer Commandant Admiral Karl Schultz has made it clear that fighting IUU fishing now represents a key priority for global coast guard operations. The focus of open ocean patrols is mainly on the activities of distant water fishing fleets in particular, and the carrier ships which supply them and offload their catch, which operate often under a cloak of secrecy in international waters.

At stake are efforts to improve the health of diminishing fish stocks—and the economies of countries that are heavily dependent on fishing. Illicit fishing activities don’t just harm the livelihoods of those who fish legally. They also undermine fisheries conservation and management efforts, contribute to global overfishing, and, according to multiple credible reports, have even been linked to trafficking in people, drugs, and weapons. 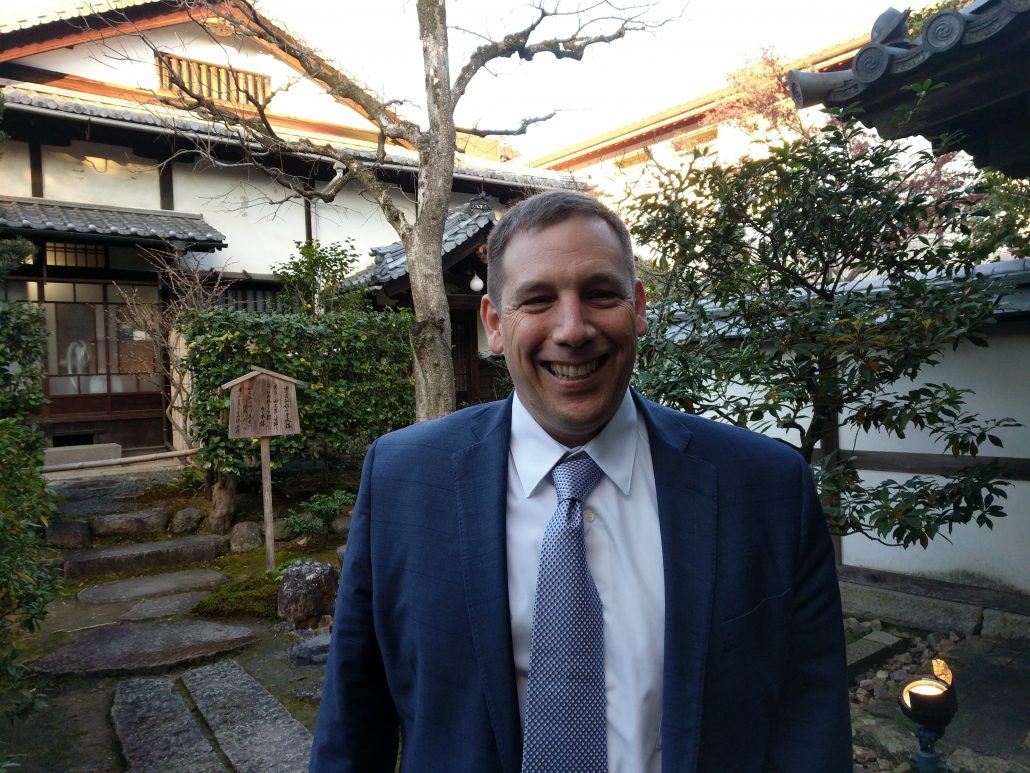 Captain Adam B. Morrison, pictured while serving as the U.S. Coast Guard Attaché at the U.S. Embassy in Tokyo, Japan

Two years ago, Captain Morrison was appointed as the first ever USCG Attaché, representing the US Coast Guard on strategic maritime security issues to the government of Japan, based in the US Embassy in Tokyo. The newly created role is an indicator of the importance of this region to US strategic security interests.

“The patrol has been carried out annually for more than 25 years now, with the mission of protecting living marine resources and enforcing international fisheries agreements, as well as supporting maritime security in general. When you think about how vast the Pacific Ocean is, and the number of vessels out there fishing, you see the huge challenge. Enforcing fisheries regulations is a daunting task. I wanted to see how we could make our enforcement activity in fisheries even better.” Morrison said.

The Pacific is the largest ocean basin in the world and home to the world’s largest tuna fishing grounds. According to a recently published paper, the Pacific is a source of about 60 percent of the total reported global marine capture, and the Northwest Pacific is the most productive fishing area in the world. While management bodies in the Western and Central Pacific, like the WCPFC and the Pacific Islands Forum Fisheries Agency (FFA), have developed world-leading fisheries monitoring and control programs, there are still gaps, especially in the Northwest. IUU fishing represents a critical challenge to responsible fisheries management in the region. In the western and central Pacific Ocean alone, over US$142 million of IUU seafood is transshipped each year, a 2016 study estimated, most of it misreported or not reported by licensed fishing vessels.

NPFC Compliance Manager Peter Flewwelling introduced Captain Morrison to Gunther Errhalt, a Global Fishing Watch (GFW) analyst based in Japan, to help build an in-depth analysis of trends in illegal fishing activities in the North Pacific region. The aim was to see what connections could be identified between potential IUU fishing activities and build an enforcement plan for the 2019 patrol.

Meanwhile, just under a year ago, the USCG began a first-of-its-kind collaboration for any coast guard force. Its Research and Development arm started working with GFW to conduct research on IUU fishing. The collaboration is the opening initiative of GFW’s new data and analytical cell which aims to support governmental efforts to better understand their fisheries, and embrace transparency through publicly sharing fishing activity and marine data. GFW’s analysis of complex open data, using machine learning and big data processing, brings to the surface information of interest to maritime security agencies, complementing traditional intelligence programs. The insight GFW can provide is not limited to fishing activity. Analysis can indicate if fishing vessels may be engaged in illicit activities such as slave labor, trafficking or piracy. Bringing together historical and current data on vessel fishing activity, vessel encounters at sea, port visits, identity changes and fishing authorizations, GFW provides information that feeds into risk-based enforcement action undertaken by relevant authorities.

The collaboration with USCG meant GFW was able to help Morrison build connections with key players such as the Japanese Fisheries Research and Education Agency to strengthen analysis of IUU fishing patterns in the region. GFW’s data analysis tools were also deployed directly when the 2019 Patrol got underway to help inform which vessels to target for possible law enforcement actions.

In July 2019, the high endurance Coast Guard cutter Mellon set sail from its home port of Seattle. Over the following two and a half months, its crew of 150 covered 19,000 nautical miles on patrol in the North Pacific, with support from Canadian fisheries inspectors. As in previous years, the patrol was assisted by a USCG C130 long range surveillance plane based in Japan, flying missions of up to 8 hours to assist in spotting potentially suspicious vessel activity. But this year’s success rate in identifying violations was unlike any before. 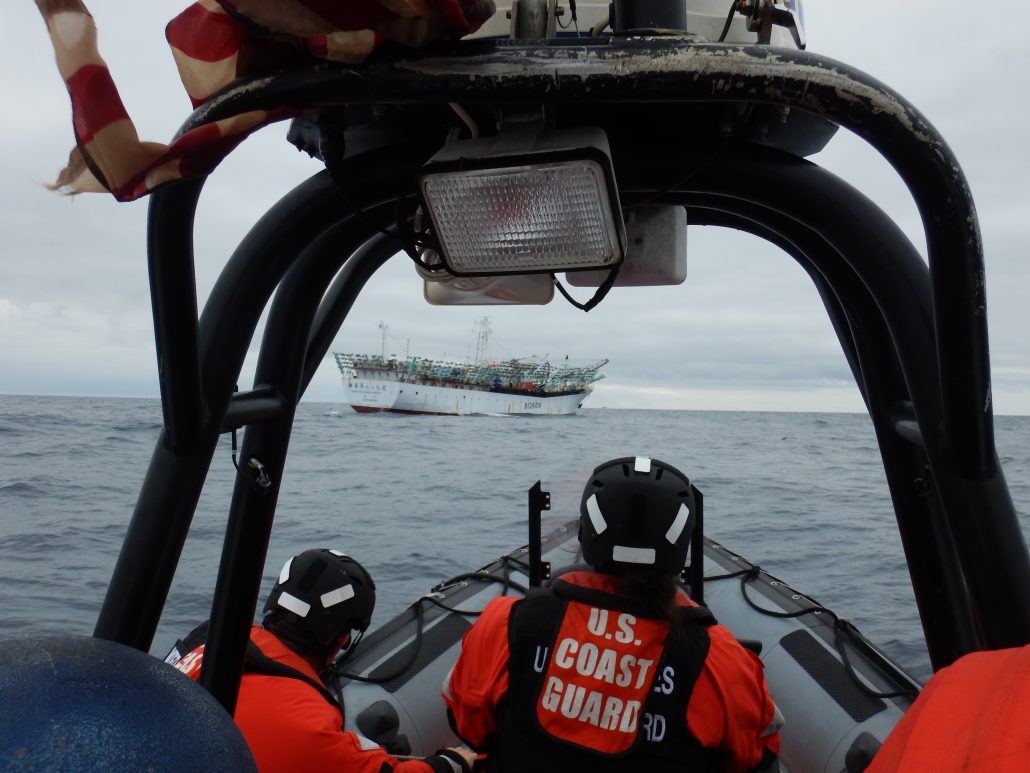 A boarding team aboard an over-the-horizon cutter boat from Coast Guard cutter Mellon approaches a fishing vessel to conduct an at-sea boarding in the North Pacific Ocean, Aug. 13, 2019. © US Coast Guard.

The patrol produced a 344% increase in fishing vessel boardings and an 867% increase in identified violations compared to 2018. In all, the Mellon conducted 45 fishery boardings, with 68 violations being assessed.

Vessels boarded by the USGC in 2019 were from Japan, Russia, South Korea, China, Chinese Taipei and Panama. Their most frequent violations were improper vessel marking, illegal shark finning, mis-reporting of catch, and improper use of or intentional tampering with the vessel monitoring system. Twenty-five were serious violations because of their potential to severely impact fisheries and/or blatant disregard for conservation and management measures.

Violations are written up in boarding reports and submitted to the flag state of the vessel and the relevant Regional Fisheries Management Organization (RFMO). The flag state can then investigate the findings and report back to the RFMO member countries what sanctions were taken against the vessel. Open data can further help in identifying where catch from vessels with serious violations enters the supply chain, this insight can be used to support stronger port controls to ensure IUU fish does not end up on supermarket shelves. 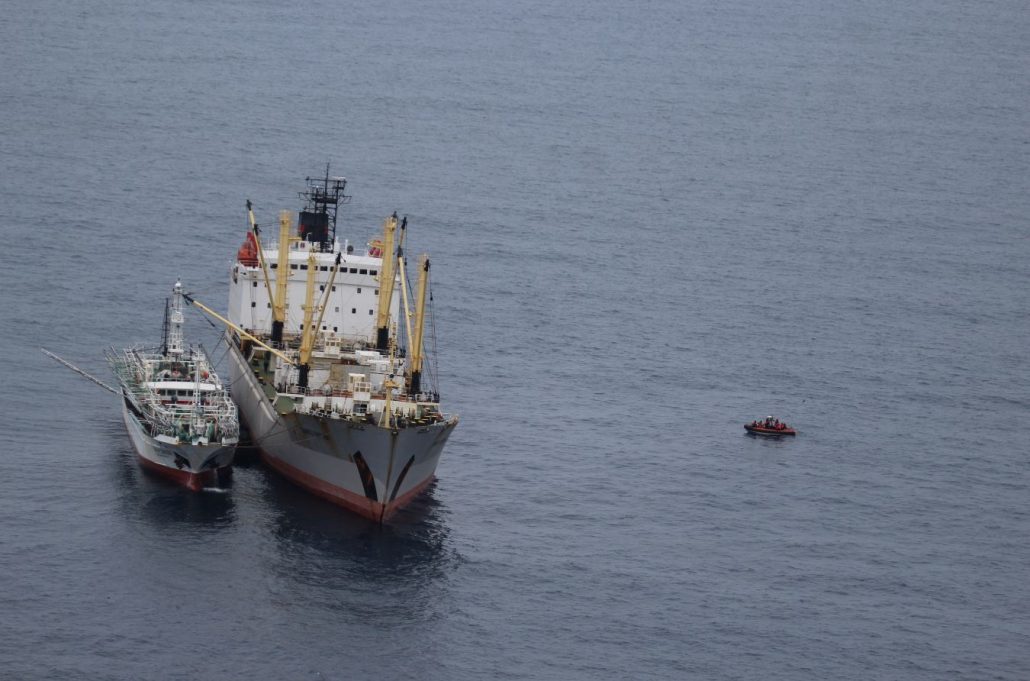 A boarding team on an over-the-horizon cutter boat from Coast Guard cutter Mellon approaches the Chinese-flagged fishing vessel Lurong Yuan Yu 899 as it offloads catch onto the Russian-flagged transshipment Vessel Pamyat in the North Pacific Ocean, July 15, 2019. © US Coast Guard.

“The difference was stark.” comments Captain Morrison. “The additional analysis provided by NPFC and by GFW’s near real-time satellite-tracking data gave us a whole additional layer of intel. It enabled us to focus on vessels that may have been engaged in transhipment activity, and to zero in on potentially questionable activities occurring at night. That sort of granular analysis is not typically undertaken by the U.S. Coast Guard.”

Captain Jonathan Musman, the Mellon’s commanding officer, commented: “It was an honor to be on the front lines of enforcement efforts of the distant water fishing fleets. IUU fishing is one of the greatest threats to the ocean’s fish stocks. These fisheries patrols are vital to demonstrating the U.S.’s commitment to our regional partnerships while strengthening regional maritime governance and promoting sustainability of living marine resources.”

Captain Morrison is typically modest when it comes to his role in pioneering an application in support of fisheries monitoring and control by the USCG. He credits the Mellon’s crew and Captain Musman with the successful operation. But he believes the model could have great merit and potential.

“Every maritime nation around the world has limited enforcement options to patrol inside and outside their EEZs, with competing priorities of law enforcement, search and rescue and other important missions. GFW’s platform provides a vital overlapping layer of intel, giving greater transparency on legitimate vessels and potential violators involved in IUU fishing. Whether you’re a large or small national state, to have access to near real-time data on fishing activity in or outside your waters is a very powerful tool. It sheds light on the problem, so that countries with restricted enforcement ability can focus their efforts efficiently on illegal fishing.” Morrison said.

GFW is further extending its collaboration with the US. Last month, the National Maritime Intelligence-Integration Office (NMIO) announced a new partnership between GFW and the Marine Conservation and Maritime Security Coalition to increase transparency in the global maritime domain. The partnership aims to reduce conflicts over maritime resources and increase regional stability at sea by providing enhanced analytical power and increased data sharing with relevant maritime authorities.

“Through our work with maritime agencies we have seen first-hand the role open data can play in supporting at-sea enforcement. Open data can easily be shared between organizations and, if presented in the right way, an experienced analyst can quickly identify high risk targets than can then be investigated further by more traditional, closed intelligence systems and on-the-water assets.” commented Charles Kilgour, Director of GFW’s Data and Analysis Cell. “It was impressive to see how the USCG was able to use our data to target vessels with boardings by inspectors that knew the regulations inside out, this combination helped contribute to such an effective patrol by the USCG Cutter Mellon.“