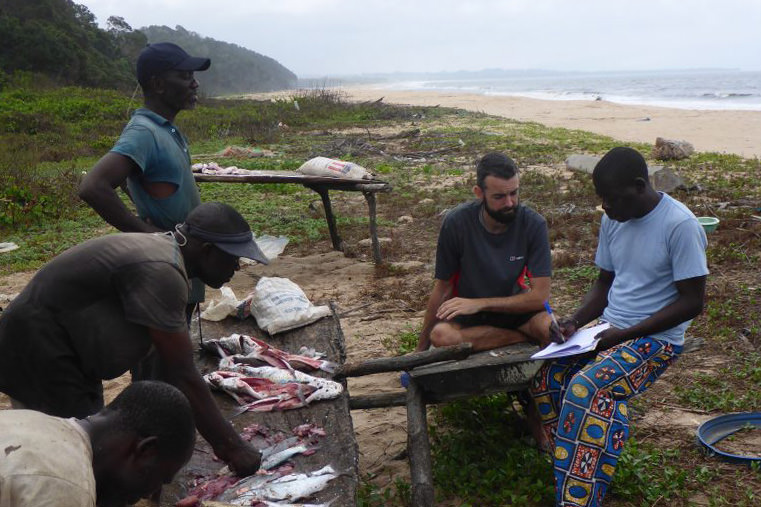 Before discovering Global Fishing Watch, Dr. Kristian Metcalfe worked in Gabon on the west coast of central Africa on a Darwin Initiative funded project (20-009). The project established a network of Marine Protected Areas (MPAs) using spatial analysis of satellite-derived data such as  Automatic Identification System (AIS) and Vessel Monitoring Systems (VMS). Although some governments are already using AIS or VMS to observe fishing activity in their Exclusive Economic Zones (EEZs), many do not have the infrastructure or resources to do so. To Metcalfe, Darwin Research Fellow at the University of Exeter, Global Fishing Watch has the potential to override those concerns. He is using our tools to demonstrate the potential strength of satellite data for more transparent monitoring and enforcement at sea.

Metcalfe became a beta tester for Global Fishing Watch in the early stages and started using it to inform his work in central Africa. Now, he is working on a new Darwin Initiative funded project (23-011) in the Republic of Congo with Professor Brendan Godley and Dr. Matthew Witt to collect various types of data on human activity in the marine environment and to inform the development of a marine spatial plan, with a particular emphasis on improving fisheries governance.

“Until recently, fisheries hasn’t been a priority area for government funding in Congo because a large proportion of the government revenue is generated by hydrocarbon exploitation. However, with poverty alleviation and food security in mind, there has been a recent push by the government to better protect local livelihoods and fisheries resources,” he said. He hopes to use Global Fishing Watch to show the Congolese Ministry of Fisheries that AIS is a cost effective tool for monitoring and enforcement efforts.

“Instead of spending thousands of dollars on a monitoring system, they could monitor fisheries online with Global Fishing Watch,” he says. “I have used Global Fishing Watch to illustrate the value of real-time data to the fisheries agency in Congo, as well as explain to them that with a monitoring system in place, they can better manage and enforce their fishing fleet.”

In fact, Metcalfe has already had some success in pushing the Ministry towards stricter action against illegal fishing. “In conjunction with other monitoring approaches, we have used Global Fishing Watch to show them patterns of illegal fishing within Conkouatai-Douli National Park and the artisanal fisheries zone,” he said. “Now we are working together with our partners (Wildlife Conservation Society and Rénatura) to provide more funding to increase local capacity to undertake patrols and improve enforcement.”