Analysis of artificial reefing areas will bring marine life benefits to the Gulf of Mexico.

Ami Everett is a marine scientist at Blue Latitudes and lecturer at the University of North Georgia.

Opinions surrounding the oil industry are dynamic, complex and often controversial. However, there is one viewpoint that almost all fishers can agree on: some of the best fishing the Gulf of Mexico has to offer can be found around offshore oil platforms. A team of undergraduate researchers is using Global Fishing Watch’s open data to better understand the intricate relationship between the Gulf’s commercial fisheries and the Rigs to Reef program, a government-led initiative to modify decommissioned oil platforms so that they can continue to support marine life as an artificial reef.

The exploration for offshore oil and gas reserves in the Gulf of Mexico began in the early 1900s, leading to the installation of over 4,000 offshore platforms at its peak. These structures helped transform the Gulf from a barren expanse of seafloor to a network of artificial reef habitat, making platforms so much more than just a means to extract fossil fuels. Since the structures were installed, they have continued to attract a rich variety of marine life, ranging from communities of encrusting organisms, such as corals and sponges, to commercially and recreationally valuable fishes including red snapper, gray triggerfish and amberjack. Over time, these ecosystems have developed into an invaluable resource to the local recreational and commercial fishing communities.

However, offshore oil and gas reserves have a finite lifespan. When it comes time to decommission a platform, an oil and gas company is legally obligated to completely remove the structure and restore the seabed to its original condition. The traditional decommissioning practice of complete platform removal results in the loss of critical reef habitat and some of the Gulf’s most popular fishing sites. To combat this loss, the Rigs to Reef program was created. 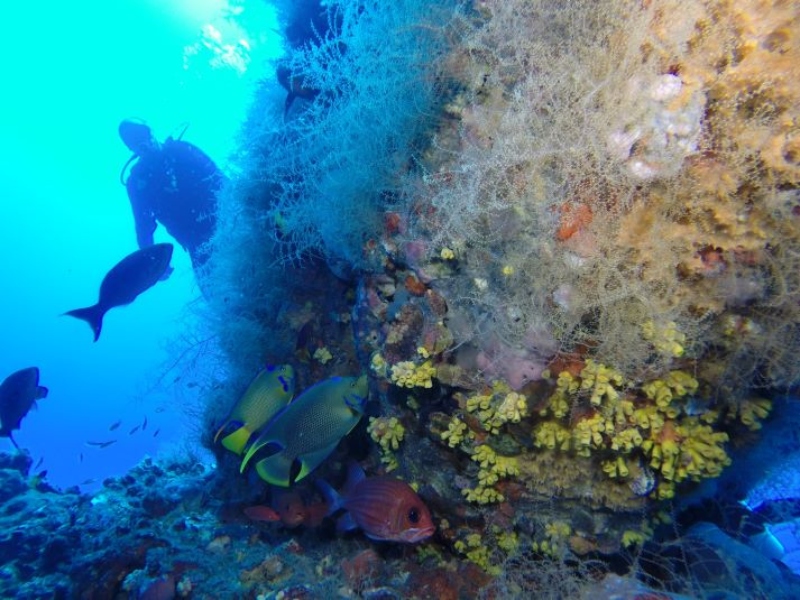 Photo credit: Blue Latitudes
Marine life on an oil and gas platform in the Gulf of Mexico

The Gulf of Mexico was the first to establish a Rigs to Reef program beginning in the late 1980s and has since incorporated over 500 offshore oil and gas platforms as permanent artificial reefs. This program was generally embraced by fishers, oil and gas companies and state and federal regulatory agencies like the Louisiana Department of Wildlife and Fisheries (LDWF) and the Bureau of Ocean Energy Management (BOEM). Diverse interest groups found that it offered a better alternative to complete platform removal; providing an opportunity to preserve commercially valuable reef fish habitat while ensuring an environmentally-friendly end to oil and gas extraction.

The Rigs to Reef program operates through state-sponsored initiatives and relies on the donation of platform structures — like the steel frames that support the deck and the topsides of a fixed offshore platform, which are commonly known as “jackets.” The decision on where to reef a platform jacket is based on the structure itself, the cost and potential impacts to stakeholders.

Arguably, the most relevant stakeholder group to consider when establishing a new artificial reef is the commercial fishing sector. Their livelihood is often reliant on the presence or absence of reef habitat. For example, fishers targeting red snapper depend on the availability of reef habitat whereas shrimp trawlers must actively avoid these structures to prevent gear entanglement. When considering the establishment of a new artificial reef it is therefore important to identify all potential user groups and challenges that may arise.

In the years to come, removal of offshore oil and gas platforms will exceed installations in the Gulf of Mexico and with this shift more platforms will be proposed as reefing candidates. New and innovative reefing options are currently being implemented in the Gulf to preserve artificial reef habitat for structures like spar hulls and topsides, and regulators are currently evaluating the option of reefing structures in the super deep sea. As these reefing opportunities increase, it is critical that operators, regulators and state agencies assess all potential impacts that these reefs may have on marine ecosystems and relevant fisheries stakeholders.

To help address this, a team of marine scientists at Blue Latitudes designed a commercial fisheries analysis using Global Fishing Watch’s open data. Founded in 2015 by Emily Hazelwood and Amber Sparks, Blue Latitudes is a certified women-owned marine environmental consulting firm. In 2018, Hazelwood and Sparks were listed in Forbes’ 30 Under 30 list for their efforts with Blue Latitudes to develop sustainable, creative and cost-effective solutions for the environmental issues that surround the offshore energy industry.

Blue Latitudes has found Global Fishing Watch’s fishing activity tracking map to be a valuable tool to engage diverse audiences—from members of the oil and gas industry to students of all ages—by making commercial fishing data come alive. In partnership with faculty at the University of North Georgia (UNG), Blue Latitude’s commercial fisheries analysis was adapted for use in an ongoing undergraduate research project. Under the guidance of their mentors at UNG and Blue Latitudes, the student-led research team will use Global Fishing Watch’s map and open data to examine changes in commercial fishing effort in relation to artificial reefing areas in the Gulf of Mexico at both a spatial and temporal scale. To help guide future Rigs to Reefs conversions, results from this project will be incorporated into Blue Latitudes’ ongoing work, presented to stakeholders, and ultimately submitted for publication. Our hope with this project is that we will not only bridge the gap between fisheries and the offshore oil and gas industry, but also encourage the next generation of science, technology, engineering and mathematics (STEM) leaders and marine scientists.